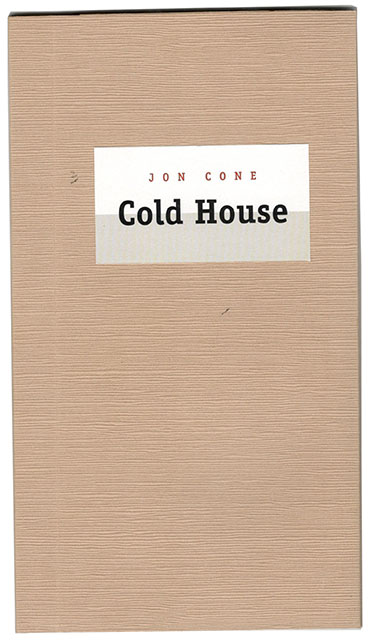 Kudos must be paid to espresso for their usual attention to detail in putting together this chapbook. Hand-sewn, scored, folded, and tipped into a gorgeous linen cover complete with French flaps, Cold House is worth a look simply to admire its soft-spoken, articulate construction.

Jon Cone’s poetry isn’t anything to balk at either. The Richmond Hill-born poet’s first chapbook since his major collection Least (2012, Greying Ghost) is equal parts frank and eloquent. Cone’s voice reflects on a life halfway passed, disgruntled, but unable to take his disappointment so seriously that it turns sour. Somehow, through flashes, observations, scattered movements, Cone turns a poem that begins “Today I was told I have prostate cancer” into a poem that ends “O moth of my heart, don’t let me die alone lol.”

It’s cheeky, the way Con keeps his poems from drowning in themselves. Legitimate pain and existential worries get tucked between “bald at twenty-seven” and “The realization that the coat I picked up for free doesn’t fit me.” The whole is a blend of its parts, and the text ends up being able to present its most difficult passages with a sympathy from the reader, which is not easily earned.