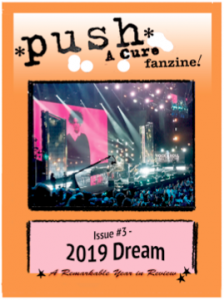 Arusha Baker’s latest issue of Pushis a densely packed documentation of The Cure fandom, focusing on Cure zines, flyers and fan networks spanning the band’s long history. The writer, Arusha Baker, is herself a long-time fan actively working on a documentary film about the band and the rich fandom that surrounds it. At 44 full colour pages, the zine is flush with images and scans from other Cure zines of decades past, following the threads over the life of the band that drew its listeners and enthusiasts together. Short exchanges (not quite interviews) with Cure bassist Simon Gallup and former guitarist Perry Bamonte are noteworthy additions to the zine. But these are brief in comparison to the pages devoted to the waves of Cure devotee subculture that have evolved in different media from the late 70s to now: national and international fanzines, early online communities, and most recently, online video events during the pandemic.

Other highlights include an interview with the editors of Cure News, the “official” Cure fanzine that ran from 1986 to 2000, and a reproduction of a 1988 Oklahoma newspaper article that profiles the editors of the Norman-based fanzineOther Voices. Arusha also talks with Other Voices readers, acknowledging how the fanzine was a site of community, how they found their partners, even their own voices through that zine. Obviously, there’s a lot here for fans of the Cure (especially long-time fans), but this issue of Pushis also intriguing as a window into what zines in general can and have done to build and shape community.