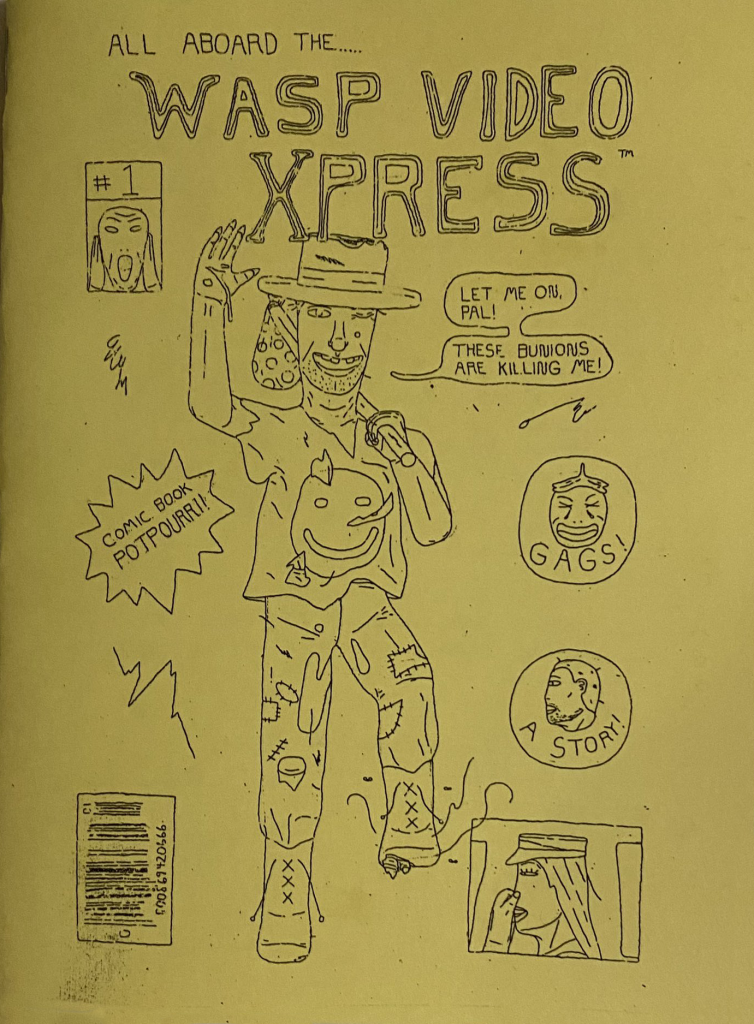 Carlos Gonzalez is probably the most authentic purveyor of mini-comic zines in the old school tradition of being mysterious and severely DIY in the most raw and comforting fashion. He has no website outside of the Big Cartel shop he uses to sell his zines and tapes. He has no social media presence to speak of. If you Google his name you only get results for a baseball player. If you Google his name + “comics”, you will be directed to the Instagram of cartoonist Carlos González Boy (a different person, but an excellent cartoonist in his own right). I don’t know how one finds out when Carlos releases a new zine except by word of mouth, but word of mouth seems to be all he needs because he rarely has copies of back issues of his comics.

Wasp Video Xpress #1 (sharing the name of his webshop Wasp Video Roadhouse) is printed in much the traditional zine-style we’re all accustomed to: cheap copies from a possibly ancient xerox copier printed on typical copy paper with a standard cardstock cover in some random colour, folded in half and untrimmed, and bound generously with three staples. It’s unlikely a computer was used at any stage of the process of creating this zine, which is underscored by a hand-drawn barcode on the cover.

Opening the book, you’re greeted by a brief introduction from Carlos posing as a train conductor. He explains his goals for the zine, and then kind of… goes off the rails. The contents are broken up into two sections: The first part is the beginning of a new serialized story called “Monday Night Testimonial,” and the second being a series of gags aptly called “Gag Central.” “Monday Night Testimonial” follows Sid Garment, some kind of worker homunculus, vaguely employed in “the mining department.” He describes his workday — encased in glass high above the ground — as he lowers a coworker into the mines below and awaits instructions from various balloons with vague symbols and patterns that emerge from the mine. Although thoughtful, Sid is out of touch with the inscrutable world that surrounds him. He accepts the unusual happenings on his commute and in his home without contention. If anything, he’s comforted by this confusing world.

This sets you up well for the gag section. Each gag is one page. Instead of goofs, they’re pages of choking on food and vomiting. Carlos’s sense of humour is consumed by a world of rot and body horror; puerile, but also quite unique. Comparable only to the humour you’d find in old Fort Thunder or Paper Rad comics, but with a much grimier varnish. No one else would want to make comics like this. I doubt they could. Carlos is peerless in this regard, which is what makes his work so essential.