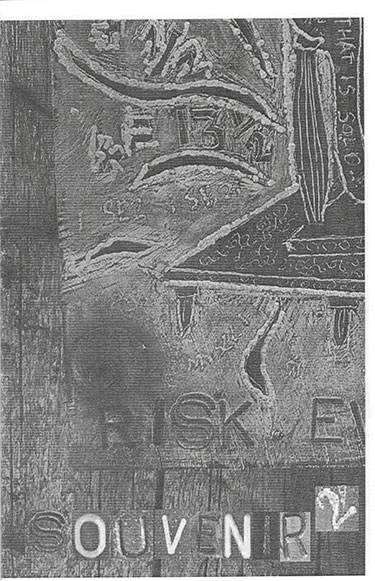 “For a festival worker, nightfall smells like trash” opens one of two essays in this zine, followed by a methodical, well-reasoned, and first-hand account of the disconnect between message and reality when it comes to the environmental impact of outdoor festivals. JM Francheteau made Souvenir #2 at the Toronto Zine Library during a “zine off” and while presumably it was hastily pulled together at an event, it has a thoroughness readers will appreciate. I learned a bunch from Francheteau’s experiences and thoughts, which are authoritatively backed up with footnotes.

But where the zine really shines is the opening piece on Toronto street artist Rocky Dobey. Culled from background reading, an interview, and face-to-face appreciation of the work itself, Francheteau details the four-decades-long career of its socially engaged street artist whose works often stand as tributes to the marginalized or departed. Dobey’s works are not the product of wheat paste or spray paint, but rather highly detailed metal, wax, intaglio prints, and etched copper plates. The black-and-white format of the zine doesn’t do these works justice, so I found photos of his work in a 2008 issue of Fuse Magazine, which included colour reproductions of Dobey’s installations in support of the Tyendinaga Mohawk titled 200 Years of Land Struggles. The texture of the text, embossed or in relief, carrying a certain gravitas, but have the hand-forged imprecision that looks unmistakably illegal. Francheteau provides a map and a list of locations where the rusted remains of these artworks have survived over the years, most of which are in Toronto’s downtown west end. Dobey remains a reluctant subject, shying away from elaborating on his work.

Read our review of Souvenir #1

I found the tone of Souvenir a little formal at times, and my copy was missing at least one page, so I am probably missing some background detail. All art and imagery in the zine comes from Rocky Dobey’s art, but the dull grays of the photocopier did not do justice to the brash texture of the original images.

Still, I was glad I got to check this out and look forward to reading more from Francheteau.