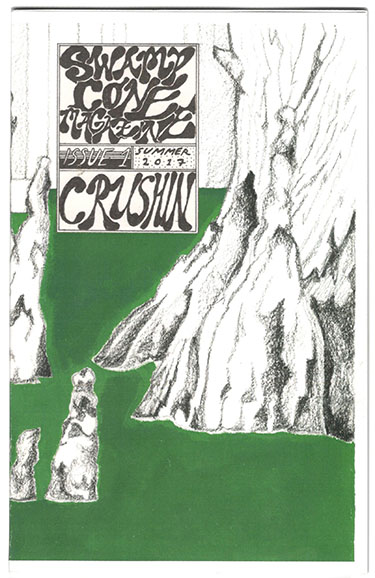 Swampcone is a new comics anthology from Vancouver, consisting primarily of one page comics from artists in BC and beyond.

The theme of this first issue is “Crushin’,” and the work in Swampcone is highly varied, with no two artists interpretation of said theme being quite like the other. Where Arvin Valenzuela presents an interaction between two longtime friends and new lovers, Sam Burns presents “Dante’s Nine circles of Creepy Crushin’.” The open interpretation of the theme gives way to a wide and varied amount of work, with no real rhyme or reason as to what constitutes an appropriate interpretation of the concept.

This is not to say that it is to the detriment of Swampcone. Instead, the uniqueness of each piece adds to a cohesive whole. I’m reminded of old issues of Snakebomb Comix, where a seeming lack of cohesion instead gives way to a stronger issue over-all. That said, with the majority of the comics in the issue being one-pagers, you’re left wanting to see more from each respective artist, which I would point to as the one weakness of this issue. With such a personal theme, I would have liked for there to be a bit more of the exploration of it by each artist. Nonetheless, what’s here is still strong work overall.