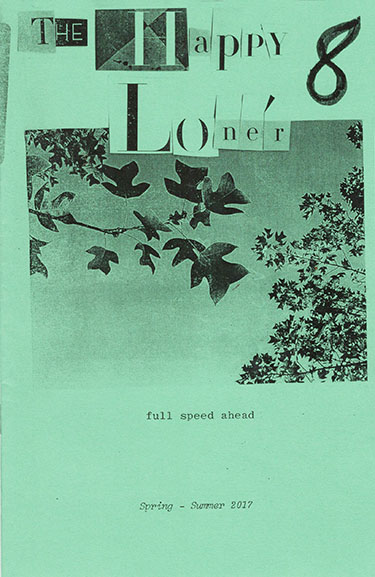 As soon as I opened this half-sized zine, I realized that I had read an earlier issue of it sometime, somewhere, a long time ago (I think it was a trade). I thought about what I remembered about it: it was written in an informal, conversational voice; it had an old-school cut-and-paste look, the writer was Québécois but wrote in English, and I remember being impressed by a cursive typewriter. As I read through Izalixe’s latest stories, every one of these things were confirmed true — except the Quebec thing, I can’t verify that based on this (editor’s note: it’s true). So what to say about The Happy Loner? It has a lot of idiosyncrasies worth exploring. For example, its title could be ironic because Izalixe is in fact married and lives a seemingly nomadic life roaming from location to location like a zinesterfied version of the Littlest Hobo. Westminister, Levis, Squamish, Montreal, and Portland are just some of the locations visited and the layout bears the ticket stubs, U.S. currency, news clippings, and snapshots to prove it. So we know she really did do karaoke at the gay bar, and she really did walk from the historic Squamish downtown to its new one. I learned a lot about places I have yet to visit in these buoyant and cheerful stories.

While I liked The Happy Loner well enough, something felt missing. Izalixe is clearly a more interesting person than me, living this adventurous travelling life and talking to strangers and stuff. It seems to me that, given this strange and daring lifestyle she has chosen, the resulting zine should have been more interesting. How did she come to be this way and why? Often her narratives are too surface-level to really tell. They wrap up in clichés like, “life is what you make it.” But is it? She writes, “Maybe after you’ve been travelling around for so long, the whole world becomes your home? Is it just me or does everyone feel like this now?” No, everyone doesn’t feel like that, that’s an unusual life to choose, Izalixe! Most people don’t live out of suitcases and become local history buffs of small western towns. The most adventurous thing I did this week was try the new soup stand in the food court near my work. Rather than extol some personal philosophy leading to her chosen lifestyle, she instead provides a lengthy review of a Paul Auster novel. I don’t get it. But I was happy to see the cursive typewriter return by the end all the same.