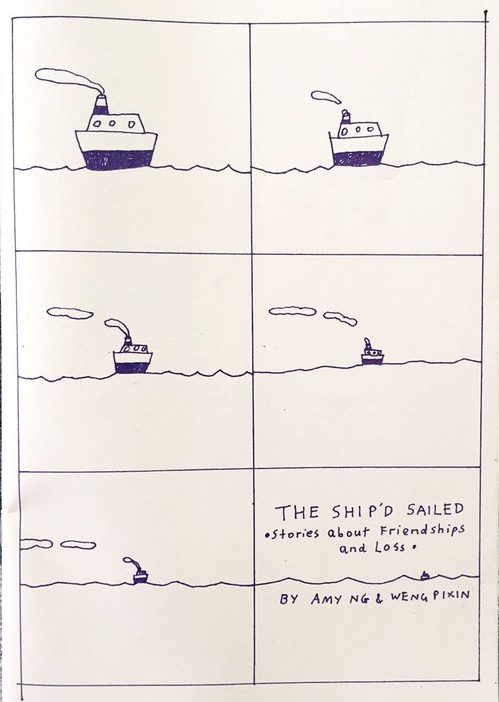 Comprising stories from seven women artists from around the world, The Ship’d Sailed: Stories About Friendships and Loss collects stories about specific friendships, exploring what happened that led to its end or withering.

The work here is deeply personal and extremely relatable. Friendships can be a fickle thing, and each of the artists excel at exploring the different forms that they may take, and the equally unique ways through which they may decline. In Amy Ng’s section, three separate instances of friendship hurdles are presented, those awkward moments where you’re not sure how to respond to a social slight. I cringed and actively began to feel anxious at one of Ng’s pages, the comic depicting a moment that I’m sure many know, and that they hate to both experience and hear about. Likewise, Weng Pixin’s section relates the deterioration of a friendship, the realization that one’s own investment in a relationship may differ greatly from the other individual, touching on the death of a friendship, and who may really be to blame.

Julia Barata’s section examines a friendship where the cause of death is unknown. 20 years later, social media momentarily resurrects it, if only for a brief moment of fond remembrance and acknowledgment that what was there was good. Miun’s comic depicts a realization of differences in real time, a friendship that, though fun in the beginning, can become exhausting. Powerpaola and Willwin Yang explore feelings of being used, and the need to admit to oneself that you’ve been made to act as a social currency or a distraction for those friendships that the other person has chosen to prioritize. AnnGee Neo’s comic closes out the anthology, their story of a close friend who, after a trip, became inexplicably distant. As with Ng’s section, I found this immediately relatable (especially Neo’s wearing only “black band tees”), and the visceral reaction the comic elicited made me pause and think back on my own friendships.

In terms of theme, The Ship’d Sailed is perhaps one of the most relatable anthologies I’ve read in a while. Each work is at times deeply personal and immediately relatable, with one being able to find themselves, or people they know, in every artist’s contribution. “When did being friends become so hard?” Ng asks. Who wouldn’t relate to that?

Want a peek inside the zine? Check out excerpts of The Ship’d Sailed here