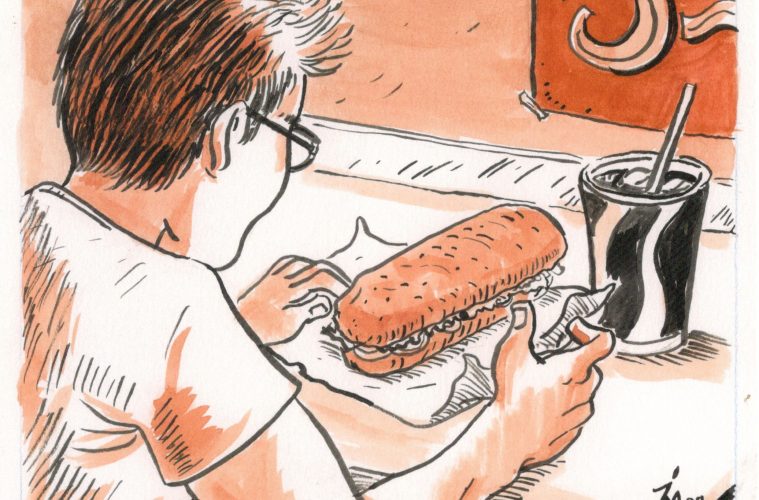 A recent study from Halifax’s Dalhousie University suggests that close to 40 per cent of Canadians eat lunch at their desk. Google it; it’s on the Internet. The visual: Sad, office drones half-heartedly plunking away at their laptops while simultaneously scarfing and/or cramming some unseemly matter/food into slacked maws. It’s an unsettling image but one that would be right at home in People Who Eat Alone, likely the comic with the most literal title of anything you’ll read about in BP this month. Hot take: I really, really love this comic. It totally nails a nuance we’ve all experienced at one time or another (or often): the dread and/or banality of eating alone in any number of circumstances. The cabbie in between calls, the hospital guest, the comic dweeb, the heartbroken 20-something. Whether these characters are self-medicating with munchies or simply eating to exist, this is a classic snapshot of “the human condition” and Mejivar captures the mood perfectly with zero attitude and two feet (plus pens, pencils) firmly planted in reality. Seriously, this is one of the best comics I’ve even seen about humanity and there aren’t even any word in it!. Just people, piles of food, some beverages and spaces to think, spaces to chew, swallow, repeat and wait until the next meal. Just real as (heck) in many, many ways. (Cam Gordon)