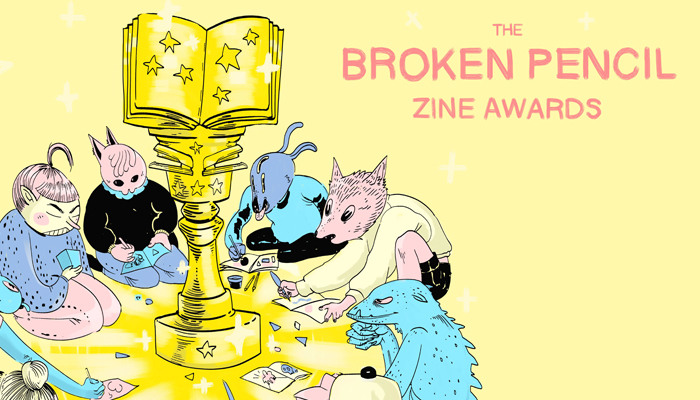 We’re so pumped to announce the finalists for Broken Pencil Zine Awards 2017!

We received over 175 entries from all over the world, and we were totally blown away by the talent, the passion, and the variety in each category. Every zine brought something unique to the table, and it was incredibly difficult picking even this handful of finalists for each category. You’ll notice that there are twice as many finalists in the political zine and comic/art zine categories! That’s because we got way more entries in those categories, and we thought it would only be fair to move a few more on to the next round.

Over the next few weeks our judging team will be deliberating deeply over each of these awesome zines to pick a winner! But it must be said — every zine you see here, and every zine entered in the competition is a meaningful part of the landscape of self-publishing. We’re honoured to have the opportunity to celebrate zinesters and their creations everywhere.

The winners in each category will be announced publicly at Canzine Toronto at the Art Gallery of Ontario on October 21st. The zine fair runs all day from 1pm-7pm, and the awards ceremony begins at 5pm in Jackman Hall. See you there!

Everything’s Fine and On and On – By Anna Sellheim (Reboboth Beach, Delaware)

Don’t Tell Me To Smile – By Emily Fin (Toronto,Ontario)

ALL TOGETHER: a primer for connecting to place + cultivating ecological citizenship By Emma Percy (Clarence, New York)

They’d Come to Me at Night – By Vincy Lim (Markham, Ontario)

You Still Need a Coffin- By Shivaun Hoad (Toronto, Ontario)

How to/ DIY Zine

How to be homeless in NYC – By Chloe Rees (Queens, New York)

How to Recognize Voter Suppression in its Natural Habitat – By Bronwyn Mauldin (Glendale, California)

Is That So? Issue 4 – By Catherine Sinow (San Diego, California)

Meatheads, Or How To DIY Without Getting Killed by Noah Wareness (Toronto, Ontario)

27 Things I Learned In My 27th Year by Alex Watt (Brooklyn, New York)