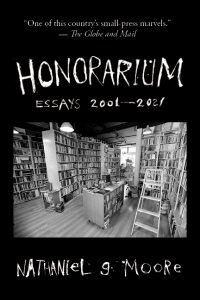 What do professional wrestling icon Bret “Hitman” Hart, a real-life 1960s Toronto religious cult, and Canadian small press publishing have in common? I’m not sure Nathaniel G. Moore could give you a simple answer. But as a critic, poet, novelist, publicist, and person, he has in his own way been deeply affected by all of them. Honorarium, which collects “essays” (read: anything-goes nonfiction) written between 2001 and2021, is ostensibly a book about books, with most of its entries comprising reviews, interviews, and profiles of early 2000s indie authors. Yet in its heart of hearts, it isn’t quite so sure what itwants to be. Sandwiched between the picaresque misadventures of a reviewer “paid in books,”Moore offers nostalgic reflections on topics such as growing up in Toronto—“Leaside willalways be my Tatooine”—and his struggles with substance abuse and institutionalization in its many guises of family, school, work, and the law—“I had become, in my own chemicalized mind, professionally mentally ill”. Although these memoir-esque inclusions are a far cry from the magazine shorts that surround them, their length and richness make them indispensable to Honorarium’s complex thematic weave. Together, these diverse genres sketch an outsized personality in at least two respects: the sincerity and wiliness of Moore’s eclectic collage style, and his steadfast devotion to the genius of others. In so powerfully bringing out the vulnerability and wit of the authors Moore has interviewed, Honorarium becomes a kind of punk send-up of the severe critical anthologies it otherwise mimics. Given the packed hardwood shelves depicted on its cover, Honorarium might look like a book written by the kind of guy who has his own private library. But in fact Honorariumis a library in a book, one whose curation reflects an insatiable and instructive curiosity.