About two years ago, in a car full of zinesters en route to Ottawa, there was a 10-minute window where we were fairly certain the world was ending.

This was before Trump was elected President of the US, before Hurricane Irma made landfall in the Florida Keys, before an incel left a trail of dead in North York, Toronto. The world seems to have ended a dozen times since that drive. Still, our reasoning was solid, if based on extremely limited data — we needed to refill the tank, and found not one but two gas stations completely sold out without warning.

This might not seem like enough evidence for an apocalypse, but we’d been primed by media images of disaster, real or imagined, where long lines of irate drivers break into fights and bloodshed as the pumps run dry.

What queer millennial could miss a new opportunity for soul-sickening anxiety?

And so we crept towards the third station, wary of what we would find, mentally preparing ourselves for the worst.

And we were fine — just a fluke, a day where two different business owners misjudged demand and happened to be adjacent to each other. We refilled the tank, we bought some snacks, we laughed about how we’d overreacted. But in that handful of minutes, convinced that society had collapsed while we were voting on our road trip soundtrack, we came to the decision that we’d be just fine. 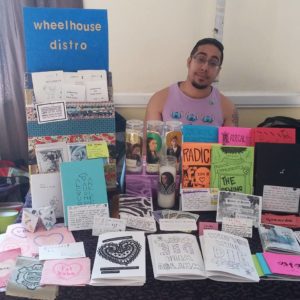 Why?
Because of our zines.

Between the four of us, our work had covered a broad stretch of topics. We talked about sobriety and addiction, sex work and suicide. My partner and I, through our distro alone, had tips ranging from how to get rid of bloodstains to decipher- ing Morse code. Our car might not have carried all the seeds of civilization, but we felt like we were pretty damn close to a library replete with the essence of the worlds we moved through.

I feel like this speaks to the reason most people create zines — they help us survive what we’re going through, and in writing them we ensure that what we’re going through survives beyond us. My writing is a much more literal take on this, exploring the vulnerabilities and badass resilience of those on the margins as well as various crises and survival skills. I’ve recently distilled this further into a disaster-preparedness curriculum for marginalized folks — Get Out Alive, Together! or GOAT — that attempts to refute the paranoid and bigoted individualism of prepper or survivalist culture with a focus on community continuity.

I write what I write and teach what I teach because, through my OCD and my trauma, I have thought of so many different ways that my worlds can end. Rather than internalize all of that fearful knowledge, I decided that I wanted to use it to help others survive the myriad dangers that might befall us, whether they be robot insurrection or viral pandemic or heartbreak.

We live in an era of perpetual apocalypse — for the marginal- ized, especially the multiply marginalized, some part of us is in a struggle for survival on any given day. Our worlds can end from a law, a bullet, or a callous word from an ignorant stranger. And con- trary to the fervent wishes of cis-het white men with a loose grasp of democracy and a bunker filled with guns, the solution to our late capitalist dystopia isn’t simply more capitalism. Our survival is rooted in caring for ourselves, yes, but more importantly, in caring for each other and building networks of mutual support.

We have survived so, so much — individually and collectively. And we will survive so much more. 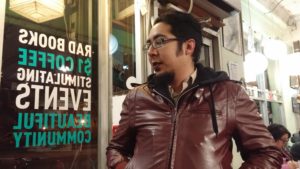 Aus is a queer, brown, non-binary, intersectional feminist born and raised in the Dish with One Spoon Wampum treaty land known as Toronto. Aus founded and co-runs the Wheelhouse, a distro and nonprofit resource supporting those facing barriers of accessibility, with the goal of building intersectional understanding and mutual support. They try to make art about survival, mental health, and the encroaching doom that awaits us all… but mostly (just barely) make rent. You can find out more at the-wheelhouse.org or Instagram at @wheel.house