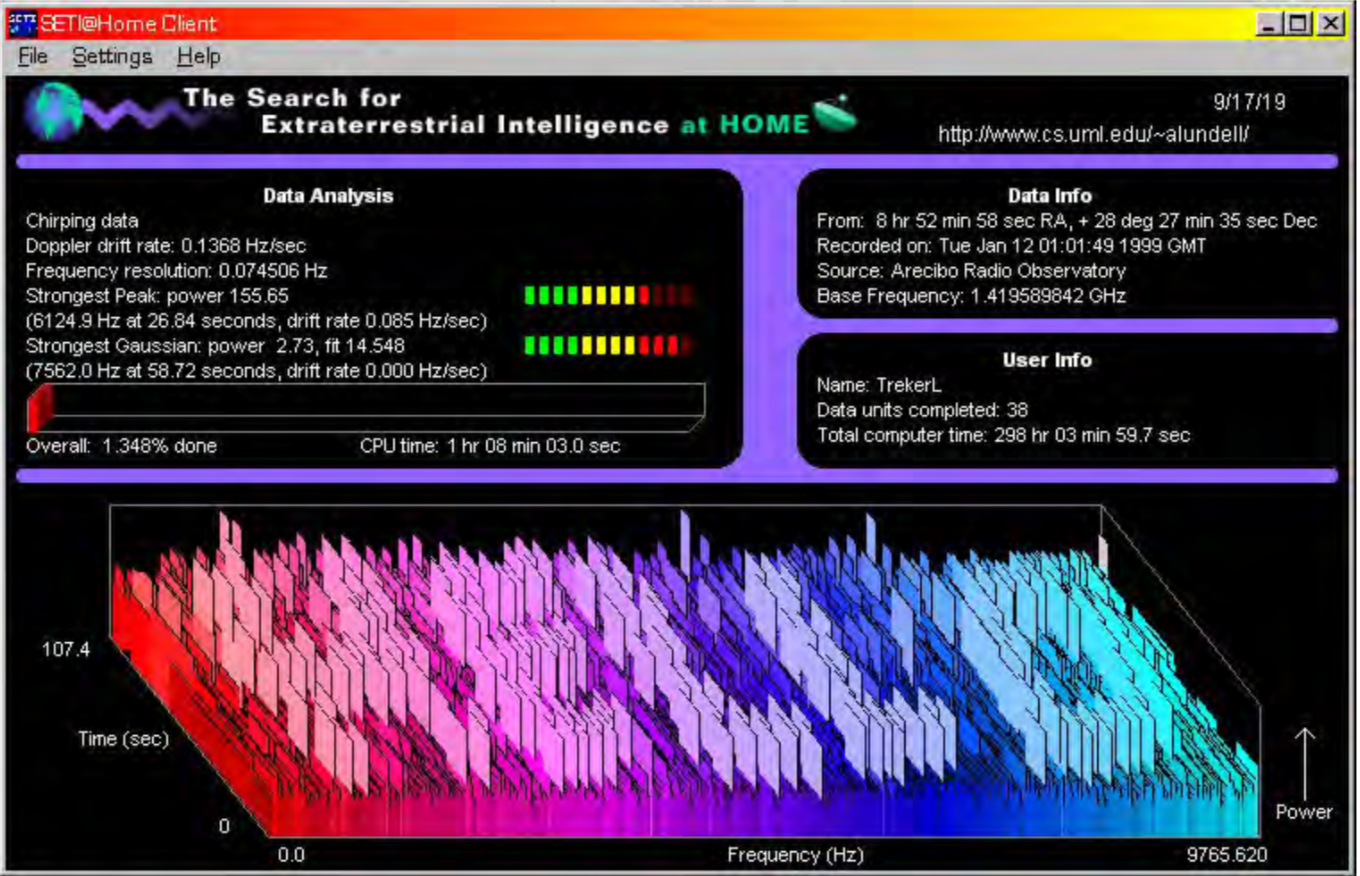 In December, my brother texted me with bad news. The Arecibo telescope had collapsed.

Space researchers the world over were saddened by the recent demise of the gargantuan radio telescope, situated on Puerto Rico’s north coast. Others recalled its fleeting moment of mainstream attention — Contact, starring Jodie Foster, in which our star facilitates intergalactic diplomacy thanks to her research at the site.

For Peter and I, the collapse felt much more personal, like the obliteration of a small piece of our childhood. For years in the 90s, our sleeping computer screen would often glow with a vision of chunky pink and blue waves swelling and stacking across a sort of graph. We were running the SETI Home Client, which lent our little Power Mac’s CPU resources to the Search for Extraterrestrial Life (SETI). The project, run out of Arecibo by researchers from Berkeley, aimed to detect radio waves from distant galaxies. The Home Client was our small contribution.

A year into our obsession with that eerie screensaver, we got the chance to visit Arecibo in person during a family trip to Puerto Rico. Our father had been confident and proud to show us sights and relics he knew from his childhood in San Juan, but even he was speechless as we walked across those vast white dishes, many football fields in diameter. At only seven years old, I could barely comprehend the scale of it all. But I knew that some fraction of our remote computing power might one day help this mammoth capture evidence, once and for all, that life existed beyond our planet’s horizons.

By the time Arecibo closed for good, I’d long since stopped running SETI’s Home Client, and government video leaks and video evidence were more urgent than the electromagnetic blips sought by SETI. Despite its several decades at work and thousands of remote helper computers around the world, it never found much.

For me, that was never the point, anyway. Sure, Peter and I dreamed of alien contact with a fervour natural to all child geeks. But really, SETI offered us a sense of being a part of something groundbreaking, something edgy, and something DIY. We were merely two tiny brothers, but alongside all these other people, we could take the big search into our own hands and reveal enormous truths.

It’s only human, of course, to ask the big questions for ourselves at some point: how do we know what we know, and why do we trust what we trust? We all must occasionally test what we’re expected to believe. Sometimes, this leads to great discoveries and advances for humanity. Usually, a person finds another lonely dead end. Concerted inquiry and skepticism are unruly, however. The tricky part is spotting the difference. When left alone with doubt for too long, or when it swells up too fast within our cynical social silos, earthlings can quickly be seduced by paranoia and even conspiratorial xenophobia. Just look at Tucker Carlson, the chart-topping TV neo-Con whose personal UFO obsession does not push gleefully ahead in spite of his political power, but because of it. Listen to his unsettling conspiratorial murmurings and you will find that they are not neutral nor accidental.

On the other hand, something opens when we band together with people far away or who are vastly different than ourselves without an agenda. Many early UFO zines were driven by this feeling that a coalition of minds should not just seek the confirmation of existing beliefs, but must pursue an open-ended investigation no matter the outcome. We could expand our universe entirely.

So send a missive while your computer sleeps. Search the skies together. Make a zine full of questions and theories and mail it all over. Somebody out there is listening.