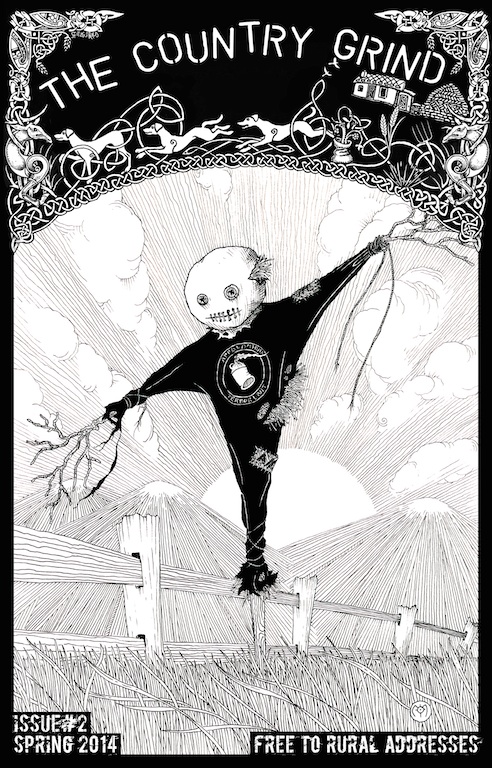 Gretchen Bonegardener is a rad person who runs a newspaper for rural punks called The Country Grind. She does all the work herself with the help of a few volunteers and distributes it across Canada. She wrote our Creative Politics column for Issue 65 about how she started the paper and why. She will also be speaking at our From Print to Pixel panel at Canzine Central (Winnipeg) on Saturday October 25! Check out the column below and be sure to check out the panel if you are in Winnipeg this weekend.

I started my slow move to rural living about 5 or 6 years ago. I liked how calm life was out in the bush, how much more control you had over your own life, and how the cops never seemed to bother you, even if you were standing on your front porch, shooting squirrels with your .22 in your underwear at 5am.
But in the beginning I would always find myself driving (or hitchhiking, before I got myself a truck) back to the city for a weekend because I needed to get my fill of punk. Being a part of punk culture has been and always will be very important to me. But as I slowly became more involved in rural living and culture, I found myself having less and less in common with even my closest city punk friends.
I had a few rural punk friends who I would keep in touch with via phone and snail mail and slowly the idea formed in my brain to have a rural punk newsletter so we could all keep in touch, because sometimes living rurally can be really lonely. I had always been a big fan of the punk zines Profane Existence and Slug & Lettuce and after writing an article for the former about being a Rural Punk and getting a lot of supportive feedback, I decided that there really need to be a magazine for us. That’s how The Country Grind was born.

In the beginning, I wanted to make my newsletter free to rural punks for two reasons: I wanted to make it as accessible as possible to folks with a limited income and I honestly didn’t think anyone would buy it if it cost money.
I really didn’t think there would be very many subscribers, but with the advent of the interwebs, a simple little callout I posted to the Profane Existence blog vent viral on Facebook and was shared thousands of times. We ended up printing 500 copies of issue #1 and we sold out almost immediately. I eventually found some folks to help me take on the ever-growing workload. I always cringe at the idea of being “in charge” of anything, but now the paper has gotten so big so fast that there is absolutely no way I could do everything by myself.
We also had to make the hard decision to start charging for subscriptions. The Grind has become so popular and with the huge spike in postal costs in Canada, it costs us $1500 to print and ship each issue. I thought that charging a fee would shrink our subscriber base, but people have been signing up steadily. It’s very encouraging.
The Country Grind is an insane amount of work, but we’re getting letters of thanks and support from folks all over the world. It makes all the long hours staring at a computer screen totally worth it. So much amazing talent has found its way to us already, and we’re just getting started. It makes me really excited to see what the future brings.

Gretchen Bonegardener spends her free time running around in the woods, huntin’, muddin’, and blasting black metal in the middle of the night with no one around. She lives in a cabin she built herself outside of a small Manitoban town you’ve never heard of.