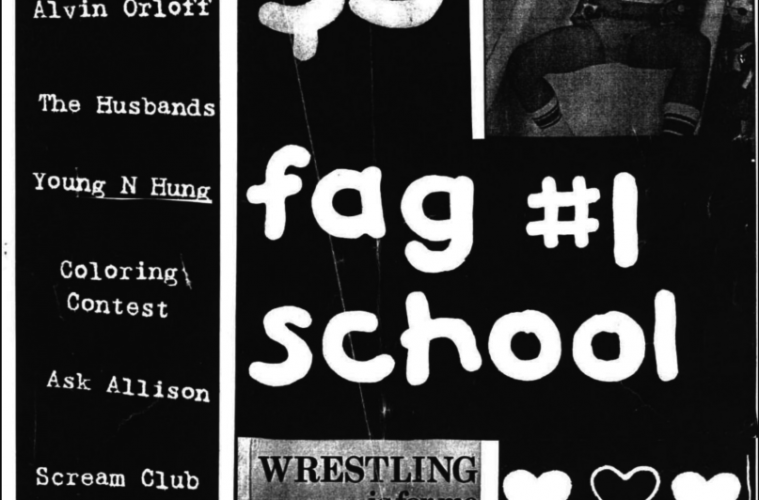 I can’t decide if I did zines in the 90s because I was cool, or because I was a complete fucking nerd. Either way, one thing I can say is, if I can say I did zines in the 90s, it definitely means I’m old (please italicize “old” in your head). I’m not saying that in a self-loathing way, of course, just acknowledging the observation of a passage of time, like when one subtly notices the trends and cultural signifiers that led them to a certain movement or event — and then begins to notice how those things have changed, or aren’t the norm anymore.

I was about 14 years old when I did my first zine, Spandex Press. Scrappy little thing with funny stories and fan pages for bands I liked. I even had sections of my zine devoted to my friends who I thought were cool!

I was like a 10th generation punk, and revelling in all the kicks: going to shows (or the ones my mom would let me go to, which were few and far between), playing rock ’n’ roll, and, of course, making zines (though in the beginning I was still pronouncing it like it rhymed with “time” as opposed to the correct way of rhyming it with “teen.”) I was connecting with a host of other weirdos, punks, and queers through the mail (the real mail!) We traded everything, but mostly mixtapes and zines.

Zines were like a calling card. Maybe they showed how funny someone was. Or maybe they were good at drawing and you had no idea! Some zines were serious and sad. But you always had to wait in the mail for ‘em!

Oh yeah, and there was this rad thing where someone would stay up at Kinko’s until 2 a.m. (back when Kinko’s was open 24 hours) and waited till the employee’s back was turned. Then they’d press a big ass magnet to the Xerox machine right at the system copy counter, totally setting the number of copies back to zero. Does anyone else remember the magnet scam?! This way, you could still have money to mail out all the copies you scammed. I was so bummed when they caught on and the magnet scam was over.

I later moved from music fanzines to straight-up literary projects, and little by little made my path to writing books. I have zine and DIY culture to thank for giving me a foothold into fully realizing my passion to write. My first book, a graphic novel titled The Cruising Diaries (Gimme Action, 2014) is an illustrated version of stories all culled from the first three issues of Fag School, a zine I started in 2003 and still do till present day. My first novella, Johnny Would You Love Me If My Dick Were Bigger was at first a shorter version of stories that appeared in the fourth Fag School.

I have noticed that zines are an excellent way to experiment with new form and writings but also let your writing demos exist and breathe as a living document.

I am well past the days of spending hours at Kinko’s (hell, there are hardly any left… are there any left?) I no longer necessarily think I should be friends with every person with blue hair riding a skateboard. But, what am I left with after making zines half of my life? I’m sort of privy to a special worldview, a view that has not only given me a realm to exist in, but also, at times, a sort of tiny megaphone with which to say, “I’m here.”