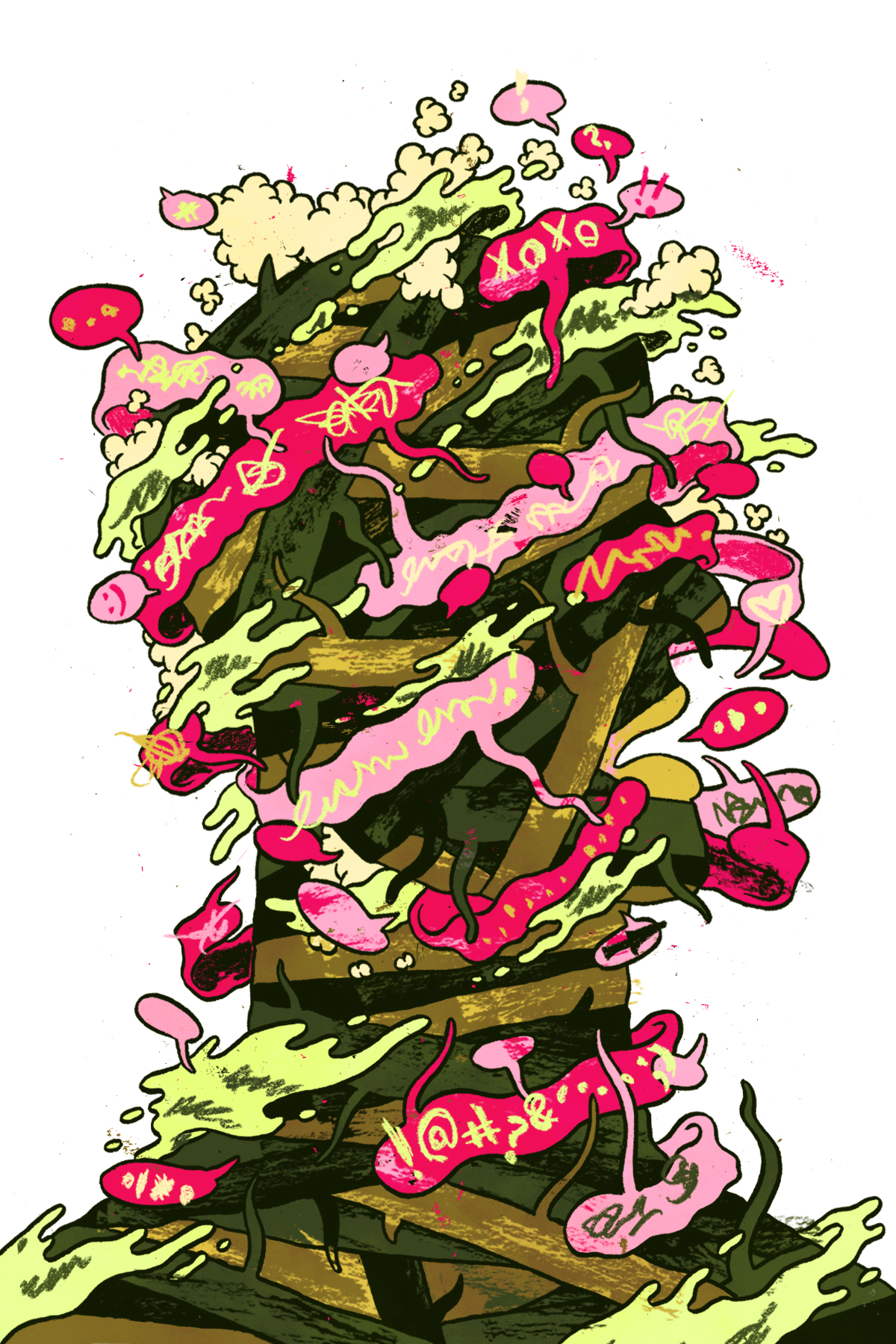 “SEE ME ACT,” he didn’t say, just after they’d kissed hello, on the cheek. He remembered, re-felt, the softness of her skin, the slight tang of perfume, not entirely pleasant She, the roughness of his stubble, two or three days old, she guessed, also not on the whole, pleasant. “Happy to see you,” he went on silently, “see me smile, see how smoothly I’m able to negotiate this meeting, keeping any anxieties, whatever they might be, at bay.”

“You look good,” she said, with a wider smile than she’d fully intended, and at which his eyes also grew wide, in a way he hadn’t intended. “But don’t I also look good?” She didn’t say, “and aren’t you wondering about my life, about who’s been sleeping in my bed, you big bear? Don’t you miss feeling me? I know you do.” Her pupils dilated, colour rushed to her chest and neck, the vee above her blouse.

“My God, you look great,” he found himself saying, quite unexpectedly. Some sudden amalgamation or conglomeration of behavioural, anxietal impulses convinced him that having said what he’d said, and how he’d said it, he now needed to pull back. “I mean, you always did,” is what he said. Though that, too, was not quite what he’d meant to say.

“You really can be sweet,” she didn’t say, and sat at the table he’d risen from to greet her.

The hotel bar was nicer than most in the area, the chairs soft and plush, the music piped-in jazz, not too loud, the tables and rugs clean.

They’d always liked this bar, these kinds of bars, bars that made them feel just a little more upscale than they actually were. Or, had been. They weren’t really a they anymore. He felt firm about that. He was with someone new, had been for more than four months now.

She was less firm; not firm at all, really. A couple of guys had been sleeping in her bed, little bear, a couple of times each, and then they hadn’t been invited back. She was into sustainability, came the unbidden, unspoken thought to her now, thinking of how good he’d been in bed, usually, though less so, decidedly less so, in their last couple of months together.

It was that fall-off in performance, though they’d never spoken about it, that had made him realize his interest was waning. He hadn’t been aware of it at first, but his body, in its way, told no lies. Even when he’d wanted it to, which, for a while, he had.

She wondered what it would be like to sleep with him again, after eight months apart. His thoughts still flitting to the waitress, he wondered, with some reluctance and even dismay, what it would be like to sleep with her again. He had intended not to think about that. And yet — never mind the waitress, what about Helena, his girlfriend? — here he was thinking about it. Or thinking — vividly, viscerally — about having slept with her before. There she was — what about Helena? — and he just wanted to touch her: her arm, her hand, her rib, anywhere.

“I’m in a panic,” he didn’t say, didn’t think to say, “a friggin’ panic,” and then the expression “heterosexual panic” flashed through his mind and made him laugh nervously.

He’d better sleep with me, she thought, or I’ll kick his hairy ass. She touched his hand.

His hand is so cold, she thought. Still, she left hers where it was. He left his there, too. Maybe she even moved hers around, just slightly, almost imperceptibly, but not imperceptibly.

He could feel the movement. His body took up the not quite imperceptible motion her hand was generating.

The drinks came. He almost didn’t notice the waitress’s blue eyes, her smile, her swivel away to another table.

She noticed his eyes on the waitress, but she didn’t really mind. The wayward glance confirmed for her that he was available, despite this new relationship of his, which, once they clinked glasses and said, “Cheers,” he began talking about.

She said, “Oh” and “Really?” and “Hmm,” things of that sort, waiting for him to run out of steam. Soon enough, he did.

He found he had nothing much to say about Helena, who really was a wonderful girl, but he struggled to get this idea across because the things that made her wonderful were just not coming to mind. They seemed pooled up, just out of reach of his awareness, almost as though hexed away. It was

something to do with things they’d laughed about together, places they’d gone that they’d had such a good time at, something about how nice it was to sleep together… but he certainly wasn’t going to talk about that. Why on earth would he talk about that? Why was he talking about Helena at all? He sure wouldn’t want to hear about any bedmates she, Susan, might have had since they’d split. Though he did wonder. And if they ever did get back together… What the fuck? Who said anything about getting back together? But if they did, at some point, despite himself, or to spite himself, he’d want to know.

Right now he did not want to know.

Why was he here?

Well, he was here because Susan was taking her clothes off right in front of him, and his, too, while she was at it. And man, was she at it. Holy shit.

Look at him, she was thinking. That’s the way it used to be. She pressed herself against him.

She’d thought this would happen and it was going to happen. They fell to the bed, they kissed, their hands were at each others’ crotches.

Kisses, hard breathing, skin, wetness… her mind was shutting off, just like she wanted it to… no thoughts, just body, just wild, just get it in, in, in…

“Oh, God,” he said. “I hope I’m doing the right thing,” he didn’t say, only half thought, and then he stopped think- ing, too, and grabbed her ass and

“That was tremendous,” was the first thing he said, a couple of minutes later, after he’d rolled off her. They were both on their backs, holding hands, looking up in the dark, in her bed, together after eight months apart. Their breathing was back to normal, their minds were mostly peaceful. She smiled and squeezed his hand but didn’t speak. Soon, everything was quiet and they slept.

They made love again in the morning, less interestingly, but not without affection, enjoyment, and a modicum of ardour. She was really a great kid, he thought, but was he really going to go back with her? Was that what she wanted? He didn’t know, didn’t ask. It seemed best not to push things, just see what happened. He still didn’t know what he would say to Helena, or what Helena would say to him, if he said anything to her. Maybe she’d be through with him and he’d be free to come back to Susan. But what if Susan only wanted him back this one time?

He really is a nice guy, she thought. He’s so distracted most of the time, though. It’s like, unless we’re fucking, he’s only partly there.

She’s kind of intense, though, he thought. Not exactly demanding, but sort of. Like you have to really focus on her. I’m not sure if I want that. Helena is relatively undemanding, at least when she hasn’t been cheated on.

Even now, she thought, he’s not really here. Maybe he’s thinking of that so-called girlfriend. Maybe he was thinking of her when we were making love…

Now what does that look mean? he wondered. She looks like she discovered something awful in her bed. Yeah, me. He smiled a little.

What is he smiling at? she wondered. Can’t he see that I’m upset?

This is all a little too freaky for me, he thought. “Listen, I’m gonna go,” he said.

“This was really nice,” he said, coming over to try to hug her. She let him, but didn’t really hug him back.

“I don’t know what’s going on,” he thought, “But I gotta get out of here. Something’s bothering her.”

“I never could really read him,” she thought.

“The sooner I’m out of here, the better,” he thought.

I”t’s like he can’t wait to get out,” she thought.

“Will I see you?” he asked, breaking off from the one-sided hug. But then he wished he hadn’t asked. Didn’t it sort of imply that he wanted to see her again — which he did, at least sort of — but he didn’t really want to reveal that, not without having a better read on what she wanted.

“I don’t know. Do you want to?” she answered. She was pleased with her directness.

He wasn’t. On the spot, he said, “Yes. I mean, I think so, if you want to. It’s all kind of confusing.” Jesus, he was just digging himself in deeper.

“What kind of a question is that?” he didn’t say.

“Well, yeah,” he said. “I’ve got this whole Helena thing to consider.” And I damned sure have no idea what you want, he thought.

“I know that’s not your problem,” he said, “but I’m going to have to deal with that somehow.”

She nodded, sort of trying to think of something to say which would show she understood — which, in a way, she did — but also feeling like he was right: it wasn’t her problem. Maybe he should have thought of that before he came over. But it wasn’t like there’d been any stipulations or expectations on her part that he’d have broken off with that other girl beforehand. Though, after last night — and this morning — who could blame her for not wanting him to be thinking of someone else? And she realized she was getting some sort of cruel pleasure from messing things up for him — and that girl.

“Well, I can’t just stand here,” he thought. “I don’t know what the hell is going on with her.”

“Well, okay, then,” he said. He took her hand and kissed it. Fucking chivalrous, he thought. Nice touch, he thought. Was that an okay thing to do?

She almost started to cry, but hid it. “Bye,” she said.

“Bye,” he said, missing both her almost crying and her hiding it.

The screen door swung shut. She watched him walking towards the corner, and the subway, two and a half blocks away.

She closed the front door and leaned back against it and stared into her empty apartment.

Now what? She wondered