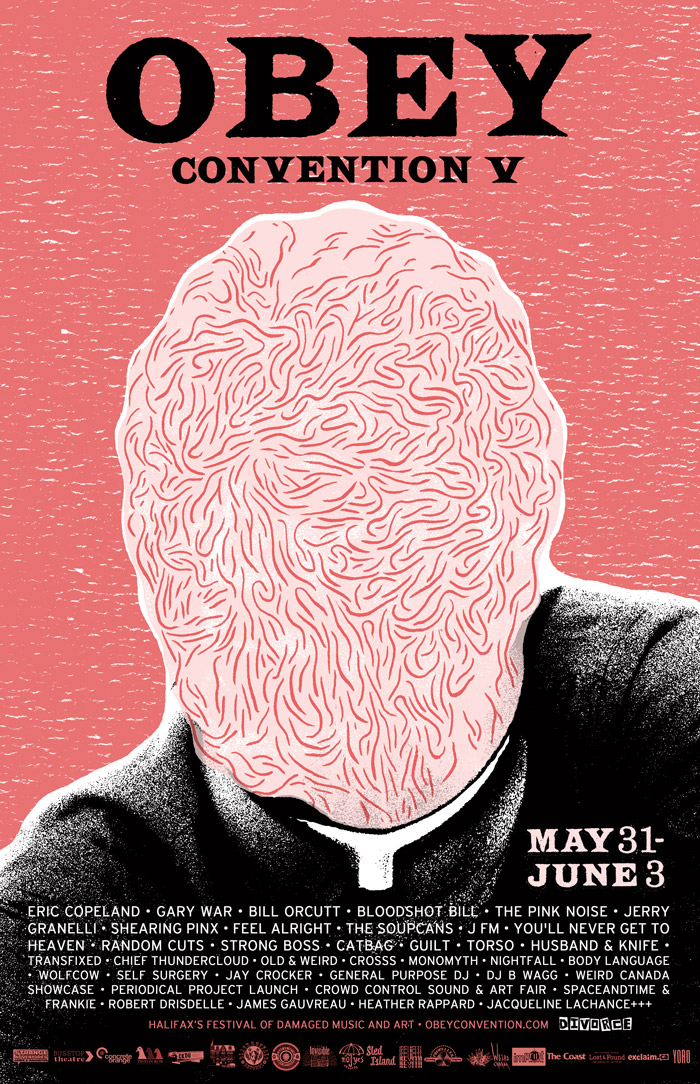 After a yearlong hiatus, Halifax’s brilliant festival of “damanged music and art” returns as one of the spring’s weirdest and wildest events. Presented by the eminent Maritime label Divorce Records, this year’s festival features the music of the mighty Bloodshot Bill, Vancouver’s Shearing Pinx, percussion legend Jerry Granelli and Black Dice‘s Eric Copeland. The event also features a zine fair, a host of video and sound installations (including a video mixtape by Heather Rappard) a DIY fair co-hosted by the Anchor Archive Zine Library, a Weird Canada showcase and a marathon drum circle in Point Pleasant Park, hosted by local artist and musician Lisa Lipton. Pretty awesome. For tickets and more info, check out the Obey website.

The Trans Film Screening Series hosts a free screening of Paper Dolls,  a documentary following the lives of trans migrant workers from the Phillipines, directed by Tomer Heymann. Vegan and nut-free food will be served. The space features gender-neutral washrooms and is wheelchair accessible, and ASL – English interpretation will be available.

The May edition of the Toronto Comic Jam is starting a little later in the evening this month. Pencils, pens, and your creative mind are enough to get this hoppin’.

Take your pots, pans, casserole dishes, and make some noise in solidarity with the students in Quebec protesting the hike of tuition fees. Wear your red squares, shirts and shorts.

Matter, composed features the work of six up-and-coming designers and illustrators using their work to bridge the gap between form and theory. The work deals with cultural and social complexity while discussing the potential of design and illustration.

Join hundreds of people for the third annual parade featuring musicians, dancers, jugglers, and entertainers of all kinds. Vegetarian food will be present for tasting.

Using a series of Montreal apartment fronts, artist David Toppings uses an urban landscape to “publish” a trans-disciplinary piece that is, at its core, a literary work. From the project description: “Diary of a Neighbourhood is designed to appear as if an entire neighbourhood arose one morning compelled to express, by writing in their windows, their most heart-felled convictions – a fictional privacy made public, a vehicle for opinion, confession, disclosure, and revelation.”

An artistic event created by Montreal artists on the edge of the Festival TransAmériques. The OFFTA offers a multidisciplinary program centered on contemporary works and various other art forms.