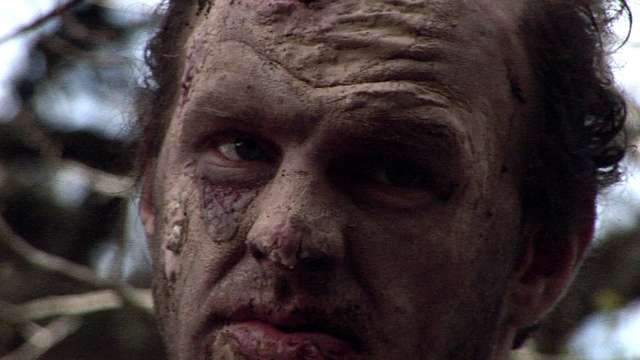 Ed note: Since this story was first posted, Lowlife won the Audience Award at the Atlantic Film Festival in September and will be screening in venues all over Canada this weekend (November 16-17). Check out this link to see where it’s playing near you.

A dog stares mournfully from the woods. A mud-slathered face leers in darkness. Naked bodies writhe in a bog. A man sucks the poison from a starfish and is propelled into a manic ecstacy by this “living drug”. These are some of the images from Lowlife, a new film created by Halifax-based artist and musician Seth Smith. Smith is best known as one half of the band Dog Day, and he also makes up half of the design/screenprinting duo Yorodeo. Lowlife is Smith’s first foray into full-length filmmaking, and the finished work falls somewhere in the mire between Naked Lunch, Lost Highway and every nightmare you’ve ever had about losing your mind in the woods.  It’s a tough film to describe, so you should probably just watch the trailer first:

A couple of weeks ago I G-chatted with Smith and the film’s actor/co-writer/music supervisor, Darcy Spidle. Spidle is the co-founder of Halifax’s Obey Convention and he also runs Divorce Records, an imprint that specializes in weirdo punk, noise, electronic and avant-garde music releases from Halifax and around the world. The pair initially conceived the film as a short story set in the woods near Smith’s home outside of Halifax.

Smith: Every week or two Darcy and I would get together and change parts and add weirder elements, until the story kind of became a monster itself that was telling us what to do.

Spidle: The entire project certainly took on a life of its own, for sure.

Broken Pencil: Did you know early on that there would be a drug component to the story and a creature component?

Spidle: The first draft of the movie was about drugs… so that stuck. We saw the forest as a place to face addiction and find some kind of forgiveness. But the story shifted more into a study of the drug itself, not so much the user.

Smith: I was getting a little weary of the heroin addict train. So the drug in the film is a little inspired by the bufo toad licking phenomena in the 70’s — an excretion that can be exploited for its psychotropic properties.

Spidle: (In the film) I would suck off the slug (starfish) until it would excrete a defensive juice. Swallow and get high.

Smith: I would say in this film, the drug and its user have more of a symbiotic relationship.

The filming took place last spring – “One of the coldest in recent memory,” Smith says – and became a completely immersive experience for everyone involved. Spidle cancelled the 2011 Obey Convention so he could throw himself completely into the role, and assumed the character Asa’s identity for over a year. He and lead actress Kate Hartigan spent hours outside in the woods, covered in mud, freezing.

Smith: You guys both turned into method actors. I had to beg you not to sleep in the woods.

Spidle: Filming and acting was too intense. I would come home sick and beaten quite a bit.

Smith: There were coyotes at the time. We actually filmed a scene in a coyote’s den. I found fur.

Spidle: There was a part towards the end when Kate the lead actress had enough with the whole thing, I think. Her line was ” I don’t want this anymore!” and it turned out being one of her most convincing lines. 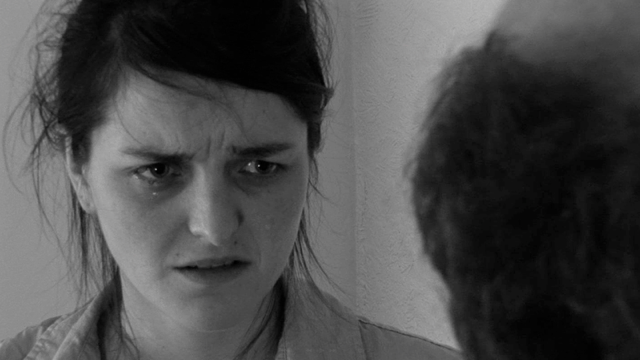 Seth, what was it like translating the images in your mind to film?

Smith: Hah – I get a kick out of imposing my views on others. But for me, the magic in directing is seeing something in your mind and with the help of a lot of people, bring it to life. I am a bit of a control freak by nature. I have some idea and i want it to be realized exactly. It’s a problem most of the time. But directing seems to be one of those jobs where it really helps.

Spidle: I was amazed at what the guy would pull off. Need a giant slug? Make it out of carpet foam and coathangers – or whatever he had. It always looked great.

Smith:The financial limitations definitely added a certain charm. It was a total garbage production, haha.Lowlife was primarily funded by an IndieGogo campaign launched in early 2012. The perks were terrific – especially if the donor was already a fan of Smith’s artwork and Spidle’s work with music. Donors received screenprinted postcards and posters, copies of the film’s soundtrack, their name in the credits and, for $2.500, you could even get a slug prop from the set. The campaign ended up raising $4,905 for the film. The rest of the film was produced through kindness and invention – Smith ended up borrowing a camera from Mike Clattenburg of Trailer Park Boys fame.
The film celebrated its debut at the Fantasia Film Festival this past July. Smith, Spidle, Hartigan and the film’s co-producer (and Smith’s wife/Dog Day bandmate) Nancy Urich traveled to Montreal for the screening.
So how did it go?

Smith: It was great. A packed house and responsive audience. It was nice to do the premiere in an outside city. I feel like you can get an honest response – there’s no invested interests and no one knows you.

Spidle: They warned us that their audience would be honest, and that half of them would leave for the Q & A.

Smith: No, everyone stayed and it was a late screening. It ended up being one of the weirder films at the festival, and for a genre film fest, that’s pretty neat.

What kinds of questions did they ask?

Spidle: They asked about music, if we got funding, what it was like to suck a live starfish, etc.

Smith:People have been asking about money. They’re surprised we didn’t have a grant and did it for $5000 bucks. So that’s encouraging. Most people ask how we came up with the idea since it’s a little left of the dial.
Spidle:I got the impression at Fantasia that people thought the movie was too screwed to get a grant.
What’s it like going back to “normal” life after an experience like this?
Spidle:Well, it was interesting to actively work at entering into another world. In a strange way, Asa’s time in the movie is an actual memory in my life.

Smith: It’s kind of like playing music. There’s a lot of highs and lows. When it’s all over you kinda think, “Did that really happen?” It helps you wanna stay motivated to catch the next wave. It’s like a drug, I guess. But yeah – a lot of the fun is just hanging out with some pals, making some fucked-up art. 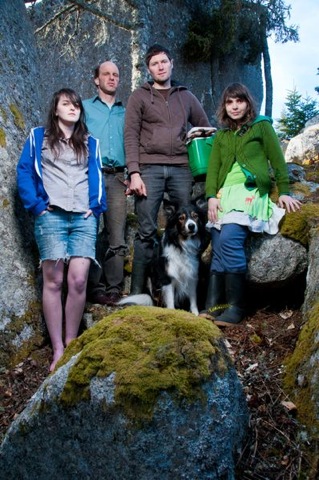