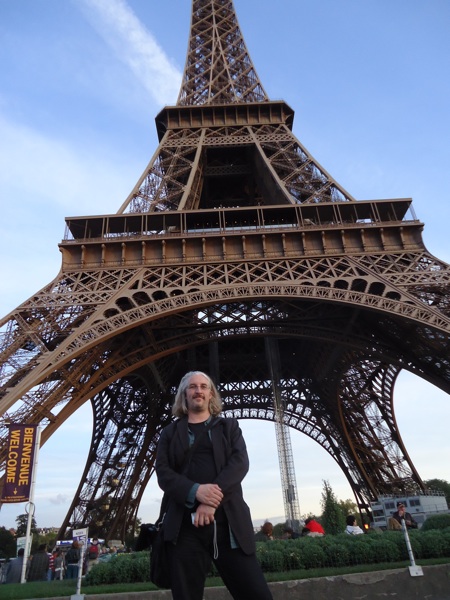 Poet, novelist, editor and publisher rob mclennan has run Ottawa-based above/ground press since 1993. The press — which specializes in chapbooks and broadsides – celebrates its 20th anniversary this year. Through above/ground, mclennan has shone a spotlight on local and national talent, releasing chapbooks by the likes of Marcus McCann, Ben Ladouceur, Marilyn Irwin, Cameron Anstee, Lea Graham and Shannon Maguire, among many, many others. above/ground’s continued existence is a testament to mclennan’s passion and commitment to indie poetry and publishing, and stands as a strong rebuttal to anyone who questions the continued survival of the independent book industry. mclennan is proof: if you want to do it, you can. Take a look and subscribe.

Broken Pencil: Did you ever anticipate being around this long when you started above/ground in 1993?

rob mclennan: I don’t think there’s any way I could have seen it going this long. But honestly, I wasn’t looking that far ahead when I was all of 23. How would or could I have known? I just kept doing and making and discovering new things to attempt.

I’ve been telling myself for years that once it’s no longer fun, I’ll stop doing it. This applies equally to above/ground press, the Ottawa small press book fair (twice a year since fall 1994), The Factory Reading Series (which turned 20 years old in January 2013), the Ottawa poetry annual ottawater, Chaudiere Books, the dozens of reviews and interviews I daily post to the blog, and so many of the other things I seemingly do for so very little reward. So far, I haven’t seen a single reason to not continue doing any and all of the above. It’s all still enormously fun. I’ve been doing so many of these things for so long that I consider them essential elements of my writing process and experience. It becomes difficult to separate one from the other.

You’ve spoken in a blog post about there being a larger arc for the press – one that has correlated with your time spent as writer-in-residence at U of A, as well as the focus on local authors, new authors, national and established authors. How has your “arc” manifested itself, and how has it deviated from what you initially imagined?

I think the core ideas for the press have been there from the beginning, if not the near-beginning, and these ideas have simply expanded, or become better articulated and executed.  In so many ways, everything I’ve done over the years as editor, organizer and/or publisher has come from that initial spark of above/ground, expanding further and further out.

above/ground is known – among other things – as having an uncanny ability to divine emerging writers who seem to be on the verge of something bigger. How do you define that feeling when you choose the writers you wish to work with? Are you able to see their future “arc” of development?

I look for writing that intrigues, surprises and/or inspires. I want writing that makes me slightly jealous that I didn’t compose it myself. Arc, as such, becomes a difficult thing to define other than simply working to continue those things that I’ve been doing, and be better at them. When I was first aware of Stephanie Bolster’s writing back in 1994 or 1995, I knew she was really on to something. My chapbook offer to her was almost immediate. But not everyone that catches my eye ends up going places. But that’s okay too. One has to have faith, I suppose.

Over the past few years, I’ve been excited watching new writers develop, and I feel very fortunate to have been able to offer help in my own way to their continued development. I don’t know if I can see a particular future arc of development for anyone, but I can certainly spot potential every so often, and am willing to be a next step for someone who might really need it. I also want to be able to provide a space for risky work, writing that might not really fit anywhere else. Already for 2013, I’m publishing new works by a couple of first time authors, including Ottawa poets Abby Paige and Brecken Hancock, and Vancouver poet (and former Broken Pencil Deathmatch contestant) Jordan Abel, none of whom I’d even heard of a few months prior.

Honestly, there’s nothing more exciting than finding great work in a random journal, and that immediate impulse to see more: (does the poet have) a book I should be reading? A chapbook? And if not, how might I get a hold of them to possibly request one?

I consider a part of what I do to be completely open to new writing and new writers, knowing full well that perhaps what I have to offer is less helpful to someone more established, but, by taking on a writer’s first or second chapbook manuscript, it might be the first time their work is promoted so specifically. I would hope that a chapbook through above/ground might make it slightly less difficult for those writers to get work accepted into journals, perhaps have some readings in various corners, and even start getting that first manuscript out into the world. With chapbooks through above/ground, I would hope that Hancock and Abel’s first books then become anticipatory, for those who might not have heard of either of those writers previously.

Can you tell us a little more about the anniversary events you have planned this year?

It’s slightly too early to talk about, but I’m working on a follow-up to Groundswell: the best of above/ground press, 1993-2003 (Fredericton NB: Broken Jaw Press, 2003) to cover the press’ second decade. I’m also talking to Sean Wilson at the Ottawa International Writers Festival about doing something at the fall edition of the fest. They were good enough to host a launch for the tenth anniversary, as well as a launch for our opening salvo of Chaudiere Books titles, so they’ve been a great support. I’d say watch the website for details of events happening in August (the press’ official anniversary, which usually includes two to four
new titles launched) and October (during the writers festival). Basically: stay tuned.

Are there any releases this year that you are particularly looking forward to and would like to highlight for us?

So far, 2013 includes new chapbooks by Abby Paige, Jordan Abel, Brecken Hancock, Joshua Marie Wilkinson, Stephen Cain, Wanda O’Connor and Gil McElroy, among others. I produced a chapbook by American poet Deborah Poe last year, and she’s coming up to do her first Ottawa reading at the end of March, alongside Wanda O’Connor, launching her first above/ground press chapbook (I’ve been trying to get a chapbook manuscript out of her for almost a decade).

Poet and curator Gil McElroy will be launching his chapbook Twentieth as part of The Factory Reading Series’ lecture series at Ottawa’s third annual poetry festival, VERSeFest. I’ve long been an admirer and supporter of McElroy’s work, and this will be McElroy’s fourth above/ground press chapbook, going back to 1995.

Recently, I finally received a chapbook manuscript from British Columbia poet David Phillips, which is enormously exciting for me. I’ve been trying to get a manuscript out of Phillips since I met him in Vancouver in 2004. We have yet to hammer the small mound into a workable manuscript.

In addition to above/ground press, rob mclennan is the author of more than twenty trade books of poetry, fiction and non-fiction, he won the John Newlove Poetry Award in 2011, and was long-listed for the CBC Poetry Prize in 2012. His most recent titles include the poetry collections Songs for little sleep (Obvious Epiphanies, 2012), grief notes: (BlazeVOX [books], 2012), and A (short) history of l. (BuschekBooks, 2011). He’s also at the helm of Chaudiere Books (with Jennifer Mulligan), The Garneau Review , seventeen seconds: a journal of poetry and poetics and the Ottawa poetry pdf annual ottawater. He spent the 2007-08 academic year in Edmonton as writer-in-residence at the University of Alberta, and regularly posts reviews, essays, interviews and other notices at robmclennan.blogspot.com. This fall, Chaudiere Books will publish his collection of short, short stories, The Uncertainty Principle.