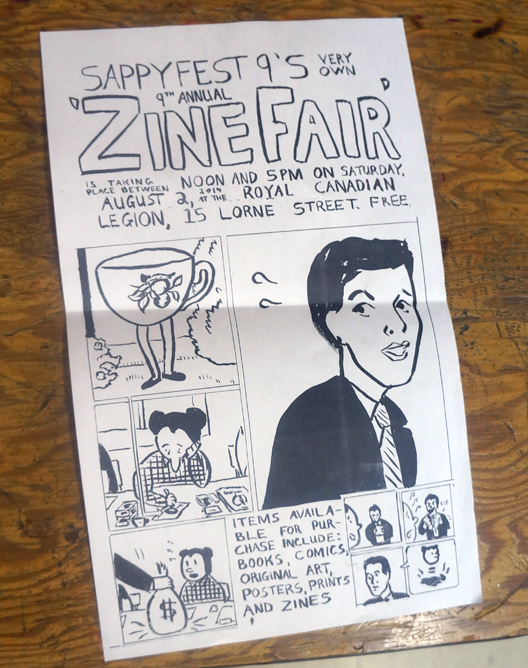 by Jonathan Rotsztain It’s an overcast morning Saturday, August 2 on the Tantramar Marsh as the sleepy zinesters of Sappyfest 9 hit Sackville, New Brunswick’s local legion for the annual Zine Fair. I’m feeling a bit out of it after a rocking night of Ketamines and Kappa Chow at the after-show Shed, but happy out of it. I feel good. 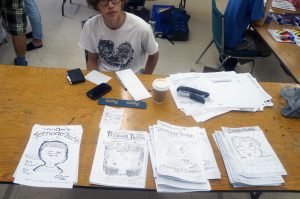 I feel even better upon connecting with the talents here hawking their wares. Andrew Thorne of Moncton is just getting into making zines, having produced his first compilation zine Teenage Trash with friends in December. They’re doing well with issue five being released at the fair. Andrew says he likes collaborating and that there’s not a lot of zine culture happening in his corner of New Brunswick. Teenage Trash is a classic zine: photocopied collages, punk poetry, band interviews, illustrations and comics. I like the raw youth vibe and especially Andrew’s comics. 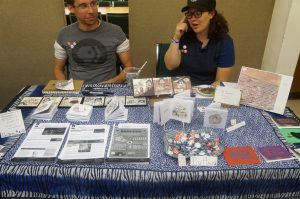 Nicole McReynolds and Jonathan Fraser are here by way of Toronto and Montreal, respectively. They first worked together through their Sheridan College/York University design program, realizing they could contribute a comic to York’s moribund student newspaper. Jon writes and storyboards and Nicole draws Barbara DeBarbara a definitely sophomoric and slightly confusing, though rather charming, strip about the madcap adventures of the titular character. Compensation seems to have come in the form of a one-time Best Buy gift certificate. The pair also created Adventures of Wall, a thrilling tribute to York’s desolate campus. More promising is Nicole’s collaboration with writer Brent Wells on the Knobtown Community Reader, the newsletter of the Toronto’s fictional Knobtown neighbourhood and it’s hard-up residences. City politics meets satire in a big way and the layout’s lovely too. 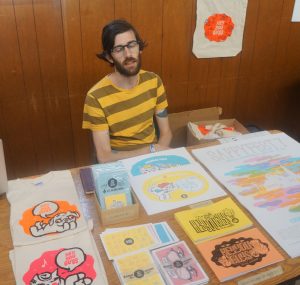 Halifax, Nova Scotia’s Paul Hammond was reppin’ two volumes of his Hey You Guys comics as well as various Yo Rodeo merchandise. Paul’s been making art stuff for about 15 years but aside from some high school shenanigans he never really made comics until his strip started in The Coast. Luckily, as half of Yo Rodeo, Paul is one of the best screen-printers around, an excellent illustrator and totally hilarious. He cites Ray Fenwick and his Hall of Best Knowledge as a direct influence, except in Paul’s version you can see who’s yelling at you. Look at for a third Hey You Guys collection at this month’s DCAF. Go read his stuff. Do it. Paul is also in Cold Warps, which I think is really cool. 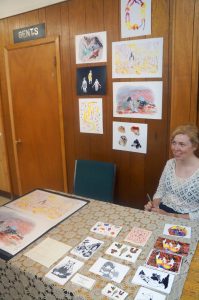 Louise Reimer is a Toronto pal and great artist. She doesn’t mean to trash talk, but correctly acknowledges that there’s little profit in making zines so she does well selling cards and prints instead. Her first show was in Montreal last year and since then she’s tabled six or seven times and she’s learning what her audience connects with. She says the Sappy audience is very receptive. Louise’s work is inspired by her time in the Yukon and she says that Sackville reminds her of Dawson City. Louise is a great artist and you can check out her bright, styling and almost psychedelic work on her official website. 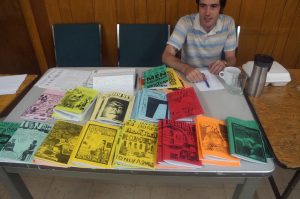 Chris Lockerbie is from Halifax via Pictou County and Cape Breton and he’s probably my favourite cartoonist in the Maritimes. He started putting out Lucky Comix with Pete Diamond, Rob Jabbaz and Jesse Jacobs in 2002 and Culprit Comix with his brothers and friends in 2008 (which includes some contributions from me). The gang is now on to Moon Hat 1400, which I think is at issue ten. Chris is a master draftsman and totally twisted so it’s always exciting to flip through the latest intentionally incoherent post-modern collage that is Moon Hat. He likes making zines because they’re fun, goofy and immediate. And he’s encouraging too. “Anyone can make comics,” Chris says. I agree. He promises issue six of Culprit is done, they’re just waiting to assemble it. 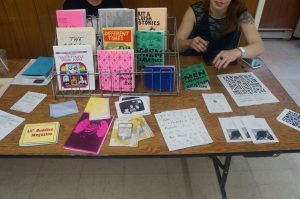 Christine Ollier is tabling for Halifax’s now legendary Anchor Archive zine library. She moved to Halifax from Ontario in September and happily fell into the local zine community at last year’s 24-Hour Zine Challenge. She got into zines via the Ottawa poetry community. Anchor Archive is now at the Plan B Merchant’s Co-op and Christine says the new spot is great for helping people stumble upon this amazing DIY resource. 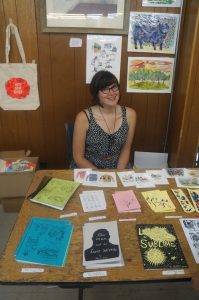 My close, personal friend and table-mate Rebecca Roher has been making art her whole life and slinging comic zines for the last three years. She explores themes of celebration and wonder with her gorgeous and highly expressive watercolour, ink and pencil work. She also does the print and card thing and many of her comics have a screen printed, die-cut or hand sewn elements. Rebecca’s comics balance a childlike naiveté with a sharp wit and her visual style is really irresistible. It was a sincere pleasure to witness her sell almost three times as much as me.

The highlight of the show was meeting fair organizer and fellow zinester Patrick Allaby. Raised in Fredericton and studying in Sackville, Patrick has been making zines for three years, ever since a cool professor exposed him to them at Mt. Allison University. Patrick has been into comics his whole life and recently completed Frank Santoro’s awesome Comics Workbookcorrespondence course, which he cites as a really good influence for creating work ethic and forcing him to make things. Patrick’s comics are deceptively simple, revealing a maturity beyond his years. His Adolescent Comics is a box of five screen-printed accordion book mines, à la Chris Ware’s Building Stories. This shit is so fucking good, I really can’t get over it. I love Patrick’s line, his understated style and all that’s implied but unsaid. Thanks for organizing the fair, Patrick. It was a blast.

Jonathan Rotsztain makes comics and hustles zines too. You can check out most of his work on his website and follow his blog.