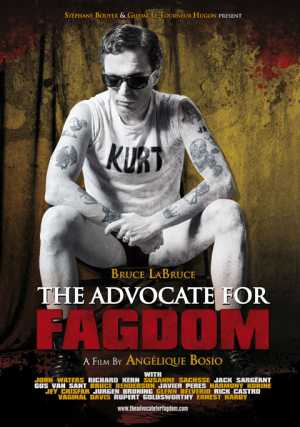 Filmmaker and early zinester, Bruce LaBruce, has been an inspiration to many Canadian punks, gay activists, sexual liberators and general counter culturalists. However, outside our borders, LaBruce’s work has been of equal influence to a number of filmmakers, authors, artists and gallery owners. His significance made its way to French filmmaker Angelique Bosio who decided to make a documentary about the “queercore” filmmaker.

The documentary, The Advocate for Fagdom, reveals LaBruce as a private and at times even shy person who created a more intense and wilder persona for himself through his films and zines, particularly in reaction to the mainstreaming of gay culture. His zines, such as J.D.s, and his many films brought together gay people who felt they didn’t fit into the mainstream punk or gay worlds because the punk scene of the time was notoriously homophobic and the gay world was becoming increasingly conservative. In the doc, one of his friends, filmmaker and photographer Richard Kern, calls LaBruce a cross between Robert Altman and John Waters, except more gay than Waters.

Despite how sexually explicit and satirical LaBruce’s work is, it is not meant purely to be shocking. It is funny without being mean spirited and it is political without being pretentious. Sure, you will encounter many penises in his films (and in this documentary as a result) but it’s not pure pornography, it is filmmaking that challenges the desire to fit into mainstream culture when, in his view, it is more fun to be the outlaw.

If you’re looking to learn more about LaBruce and his zines, this doc isn’t going to get you there. But, if you’re interested in LaBruce as a person, a persona and a filmmaker, The Advocate for Fagdom will give you a peek into that world.

The Advocate for Fagdom is playing tonight (8:45pm at the Bell Lightbox in Toronto) as part of Hot Docs Canadian International Documentary Festival.