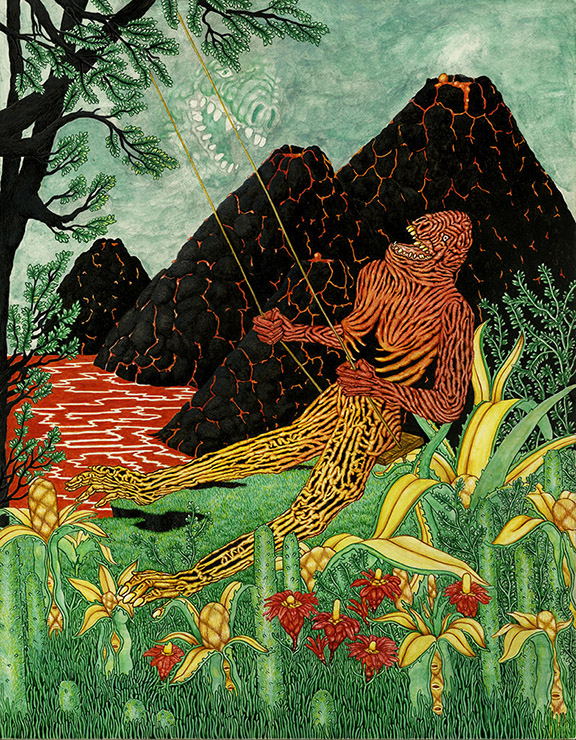 “The Garden” by Jamiyla Lowe

THE SMELL OF OUR OWN

I met Jamiyla Lowe through the artist Adrienne Kammerer. They’re best friends, and I find them a fascinating pair because they’re both amazing Toronto-based artists, and also they laugh the same way. I have a disgust for pet food and Jamiyla and Adrienne helped me feed the animals I was pet sitting. I’m really impressed with Jamiyla’s drawings because they’re so creative and also very technical. She illustrates creatures that are deranged yet beautiful – – – imaginary beings with brains that extend to their noses, cloud balls with endless faces and fabricated animals that are at once lean and malnourished. Her scenes depicting humans are also pretty lurid and look like reject pagans living on the fringes of society. A lot of her creatures look like they are deeply feeling something; either mischief or agony or a deep feeling of nothingness. Jamiyla has been drawing and screen-printing since 2007. At the moment, she’s working on the visuals for a card game.

What are your influences? Where does all this fantastical imagery come from?

Basically — – just things that make me laugh and things that I find scary. I like movies like Fantastic Planet, and artists like Uno Morales, Pedro Bell and lots of others who make creepy and fun narrative stuff. I like mysteries a lot too and a lot of the time I just draw as a way to amuse myself.

What sorts of images were you drawing growing up? How is they connected to (and how are they different) from the work you do now?

I mostly drew Garfield and dragons over and over again because drawing people was so difficult, I guess. I still feel that way sometimes. I did eventually learn how to draw people but I sometimes just find it to be less fun; like there’s less room to exaggerate.

How long does it take you to complete a drawing? What is your process for illustrating a picture? Do you ever have artist’s block? How do you get over it?

It takes about one to two months, depending on the size and content of the piece. I recently started working primarily in full colour and my work tends to be pretty detailed but I’m working on getting faster. I do often have (creative) blocks, and I procrastinate if I feel like something’s not the best I can do. The best way I’m finding to deal with it is to accept that not everything has to go perfectly and to just keep working. Everyone has good work and not-as- good work.

What are your dreams like? Do your creatures ever seep into them? Are they ever born from your dreams?

I actually did have a nightmare about a gross fleshy spider with teeny human hands that I drew. It kept multiplying and infested my mothers house. It was awful. But that was the only time thankfully.

Why do you love drawing these strange images so much? What does it do for you?

Its a way to kind of express anxieties without directly attaching those feelings to people I guess, and making them funny or relatable in a way. It takes a lot of the seriousness out of the work to draw silly-looking creatures doing horrible or sad or regular human things.

April Aliermo is a Filipino-Canadian musician, songwriter, entrepreneur and educator based out of Toronto. She plays bass and has co-written music and lyrics for Hooded Fang and Phèdre.