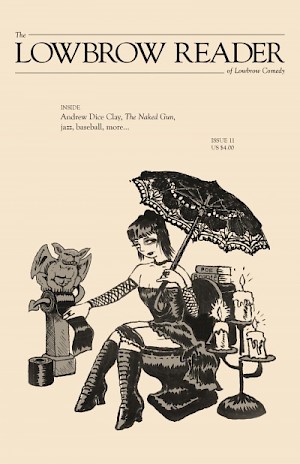 2021 marks 20 years since the first issue of The Lowbrow Reader, and Jay Ruttenberg’s zine (though it may fairly be called a journal by the bold) continues to celebrate all things unpretentious (and often blue) in comedy. Having reviewed an earlier issue of Ruttenberg’s zine (Lowbrow Reader #9 in Broken Pencil’s Issue 66), I can say not much has changed in lowbrow land. Poop and pee are still funny, and figures like Andrew Dice Clay, Paul Reubens and the makers of Naked Gun supposedly still give us questions worth considering. The zine continues to mash up fandom and magazine-style reportage while shooting for its own laughs with gag pieces along the way. It’s a nailed-on combination that’s just as well done here as it was in the issue I reviewed a few years ago — which is to say, fairly. Ruttenberg’s own writing takes up the bulk of the issue, with pieces straddling that space between reportage and fandom. Also included are cartoons by Dave Eggers (yes, him) and the late David Berman. One Ruttenberg essay is a serious think piece on Andrew Dice Clay being consumed by the stand-up comedian character that he created for himself. Dice was vilified in the late 80s to early 90s as malignantly anti-feminist and anti-queer in his stand-up comedy, but for a time he was also incredibly successful commercially. Ruttenberg’s piece considers how the character overtook the man. I am struck by how jarring it is to read coverage of figures like Dice in a world that has surely changed since my last Lowbrow Reader review. That passage of time includes the trauma of Donald Trump’s rise and regime (which Ruttenberg acknowledges has parallels to Dice’s own trajectory) and the reckoning brought forth by the #MeToo Movement. Dice was always a polarizing figure, but as with many comedians being reassessed in 2021, his oeuvre now feels… different. Thankfully, Ruttenberg’s work here is smart and sensitive to the moment, still capable of bringing the reader along and making the sordid world of comedy fascinating.

Early in the zine, Ruttenberg brings this same fascinated perspective to the coda joke of the film Naked Gun, a two-second utterance by actor Mark Holton which gained him cult status thereafter. Ruttenberg revels in the power and lifespan of such a throwaway joke. That kind of joy in his writing is part of what makes Lowbrow Reader so fun to read.