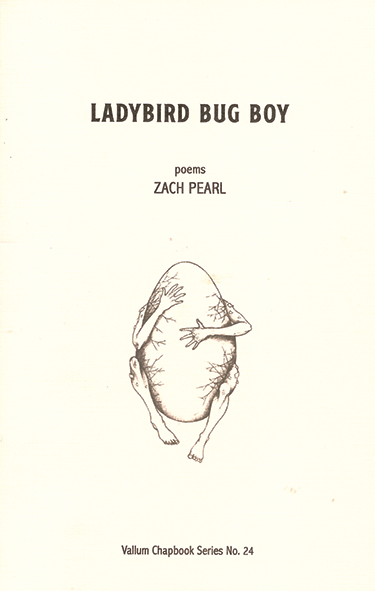 There’s a devilishly appealing current of the grotesque that courses through these poems: a sump pump toils in the dark, “Holding folds of dank, contested space.” Human bodies turn animalistic. The ghost of Mary Shelley wanders the Earth, while the downtrodden beg her to write a monstrous new metaphor for the migrant crisis.Ladybird Bug Boy is ultimately an examination of the nature of the self, both in light of the current age, and more specifically in light of Zach Pearl’s discontent with himself. Pearl uses contemporary issues to cast a veil over what is, at its core, very personal writing, though he does occasional wander into more blatant self-examination, such as, “You’re invited / to: Conquering Me / An Exhibition / of the I’s erosion.”

What immediately stands out, here, is Pearl’s impeccable employment of rhythm. Every sentence, word, and syllable is precisely plotted to create a current as “slick as quicksand.” This tempo never feels forced, though its design is evident — it’s buttressed by eloquence, wordplay and a generous use of alliteration. Ladybird Bug Boy is clever without being brainy.