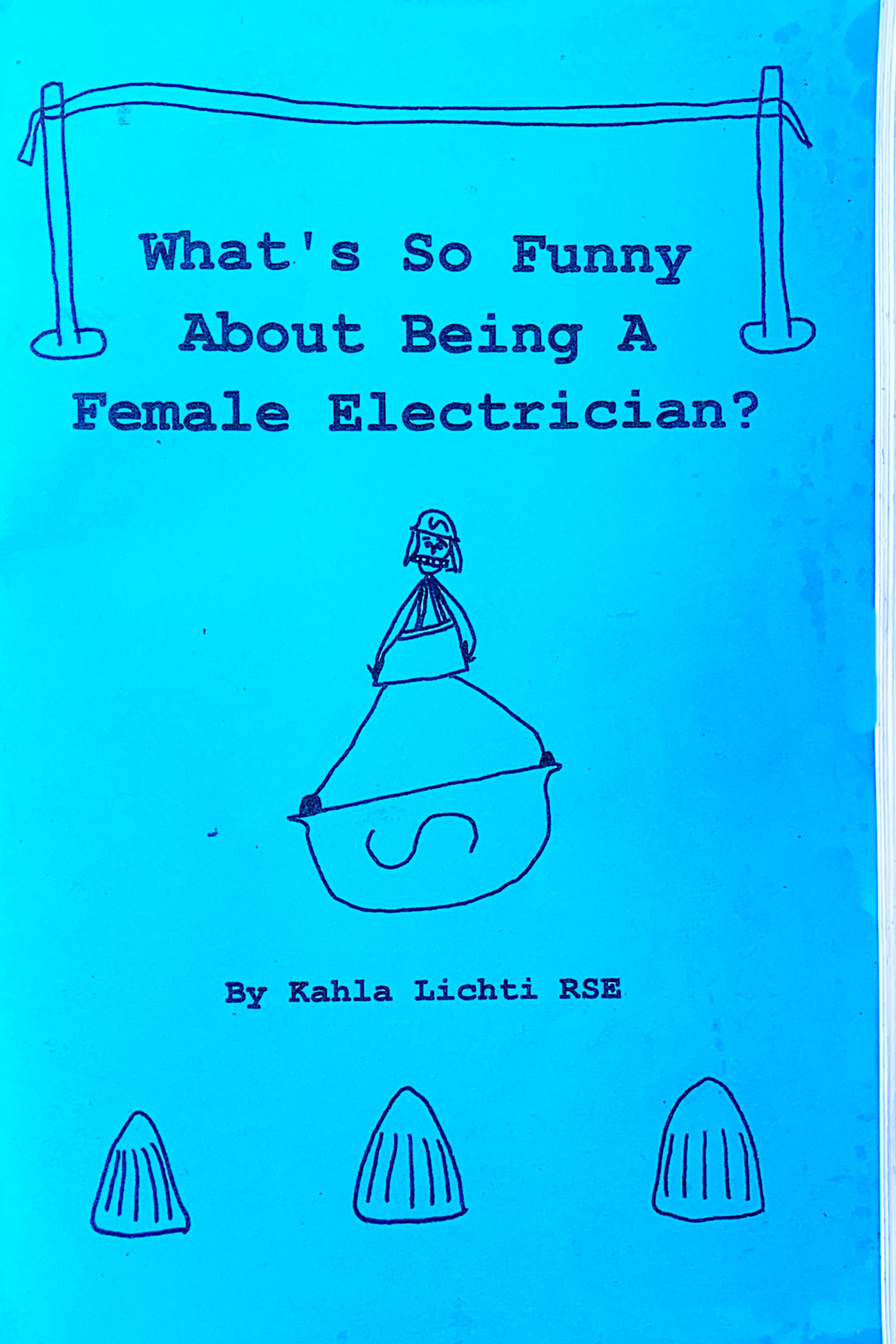 What’s So Funny About Being a Female Electrician?

It’s hard not to admire Kahla Lichti, whose blog and subsequent zines have chronicled her experience as going to electrician school, apprenticing, and eventually becoming a certified, unionized trade professional for some years now. A never-ending parade of male co-workers, supervisors and even friends seem determined to hurl inappropriate comments and behaviours at Lichti. Rather than simply complain or villainize (her right, of course, if she wants to,) she transforms it all into funny and insightful snapshots for the rest of us. Her intentionally simple cartooning style, a few steps above the stick figure level, bellies the punchy and effective storytelling of her trademark single-panel comics, which never fail to give a simultaneous chuckle and eye-roll (chuck-roll?).

In this most publication, we meet a more mature and confident Lichti, now 10 years into her chosen career. She takes advantage of hindsight, giving sage advice to any young women or other marginalized people working in the trades, mostly in the form of short essays punctuated by her comics. These cover such topics as workplace gossip, dating, her crust punk past, and, in the zine’s absolute stand-out piece, learning to be assertive rather than passive or aggressive. This chapter reflects on the meaning of assertiveness and on the artist’s years of de facto deference, which eventually led her to vow to speak effectively. It then offers advice on how the reader can do much the same, from some basic suggestions to listen and make eye contact to a step by step mini-guide on how to structure and phrase difficult conversations with difficult people. These are great, practical suggestions that will benefit virtually anybody who deals with these situations (which is, of course, all of us.)

What’s So Funny… complements Lichti’s previous print release, Shop Talk Trade Comics, by using more text than drawings. This permits a real introspective touch that the comics alone can’t and aren’t meant to provide. While the writing is sometimes a bit knotted and could benefit from a short glossary for the layman, it hardly takes away from the overall impact. It’s awesome to see how Lichti has grown and matured, and it’s a treat to learn more about her life experience and her beliefs. She has a lot of knowledge to share, and she does so in such a welcoming way that you can’t help but smile to read through such frustrating experiences. How satisfying to bear witness to her overcoming so many shitty episodes of harassment, sexism, and juvenile work cultures. And as you root her self-actualization and optimism become realized, Lichti turns on the lights and reveals that you’re rooting for yourself, too. Outstanding.