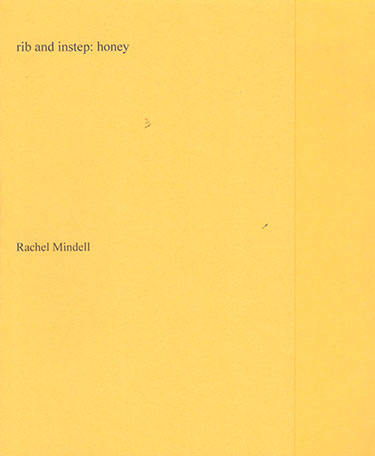 Rachel Mindell’s 18 poems, presented here in the 7” x 8.5” chapbook format characteristic of above/ground press, are almost always beautiful to the ear and slippery on the tongue, but sometimes unsatisfying in their lack of substance otherwise. “Sometimes” is the key word, here; Mindell hits genuine high notes in poems like “Life as we know it,” where the narrator physically bounces back and forth across the page, detailing memories of her father’s gradual decline on the left and discussing the celestial role of water on the right. She encourages deep reading and fosters complex connections throughout and performs a bit of that work herself in a provocative final line: “You will be pretty, as though in being pretty I could cease / to be moon, cease to be water, thief.”

However, I run into issues with Mindell’s style when it veers away from prose poetry. Take, for example, this chapbook’s penultimate poem: “Sedlec Ossuary” a seemingly consequential title, as it’s used more than once. We’re led to believe this poem is somehow significant to the chapbook, as it derives its title from a nondescript line midway through the narration: “signed the family name with  i in a jar warding evil / off the dinner table: cuboid, talus, in worship no longer questioning the lucky score for building.” I don’t think it’s unfair to read these lines as valuing style over substance, especially when crystallized in a title that amputates subject from predicate to the detriment of meaning. Perhaps that’s the point. rib and instep: honey is always aesthetically pleasing, but satisfying only sometimes.