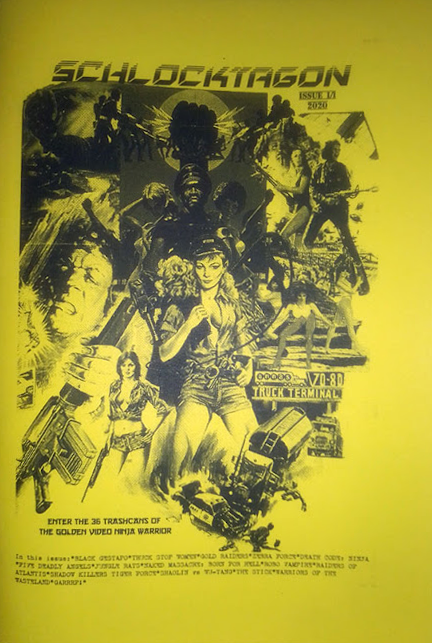 Germany-based zinester Benno (aka Golden Video Ninja Warrior) debuts this new movie fanzine Schlocktagon with an issue rife with well-toked takes on trashy action films from the 70s and 80s. The B-movie action fare that Benno draws upon is the familiar territory of other, similar fanzines interested in the off-beat gutters of late 20th-century garbage film. However, Benno’s twist is this: the movie reviews aren’t reviews per se, but rather immediate reactions to the films “all watched under the influence of the green magic dragon in order to break the walls of the brain and see the unseen truth inside these colorful pictures.”

With films like Truck Stop Women, Black Gestapo and Warriors of the Wasteland washing over Benno’s bloodshot eyes, the brief content warning offered seems appropriate. Benno explains that the films contain violence, sensationalism, misogyny, degradation, jingoism, racism, etc. — but also that “digging through the trash” in this way can be “inventive, hilarious, subversive, bonkers crazy, and fun.” Benno’s stoned response snippets are accompanied by black and white images of film posters, advertisements, and ephemera from different countries and for different releases of each of the films, all with the visual appeal you might expect from this era of undercurrent action films.

The archival imagery and Benno’s lifted approach has a lot of potential to make an exciting zine. Some of the appeal is tame, however, as several of Benno’s reaction write-ups read like basic plot summaries without much personality. This happens, then another thing, then another. The “unseen truth” promised by “the influence of the green magic dragon” isn’t in great supply. Still, there’s plenty of room to grow in future issues and connoisseurs of trash action cinema will probably love this.