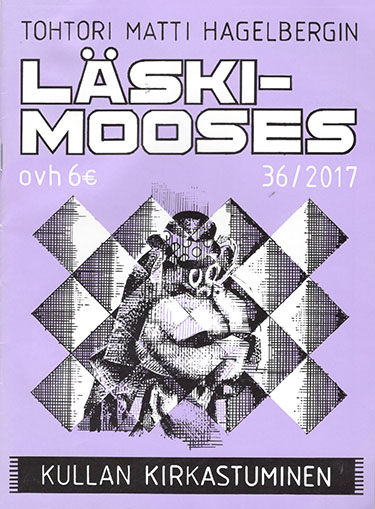 I don’t speak Finnish. Läskimooses makes me wish I did.

This is the 36th issue of Matti Hagelberg’s sci-fi epic, which by its conclusion aims to be over 1,500 pages. Issues alternate between the story of the planet Läskimooses itself, as well as side stories and adaptations of the Kalevala, Finland’s national epic (albeit suddenly set on Mars with characters from Edgar Rice Burroughs stories.)

This is a lot to take in! And though this is the only issue I’ve read, I’m going to make it a point of tracking down the 35 prior, and whatever subsequent ones there may be. To comment on what is only a fragment of the story would perhaps be a disservice, but to quickly summarize it: this issue sees the alien Agner Mang travel to Mars to learn more about the origin of his people — I think. There’s a lot going on in the issue, which is entirely in Finnish, but thankfully comes with a printed trans-lation guide. This is perhaps not the ideal way to read the work, but it never really detracted from things. The issue is strong enough on its own that referring to the translation felt all the more rewarding.

Hagelberg’s line is thick and deliberate, with vibrant blacks and strong cross-hatching that occasionally looks like a woodcut print. Hagelberg’s strength at depicting these alien landscapes and character does a great deal in conveying the tone and mood of the story, with the other-worldliness of the characters feeling all the more legitimate and actualized. Even for a first-time reader of an issue this far into its run, Hagelberg’s world building feels deep and fully realized. It’s perhaps cliché for a review to say that a work is unlike anything you’ve seen before, but I can’t really say that I’ve read any comic quite like Läskimooses. I can’t wait to dive deeper into Hagelberg’s world.