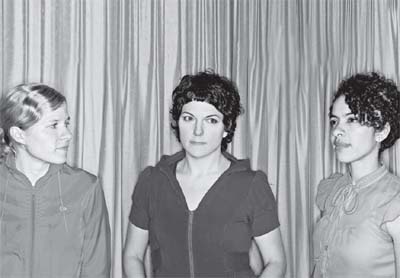 A chat with Portland’s twee-pop quartet

Together, Kathy Foster, Jen Sbragia, Kim Baxter and Ari Douangpanya make up the fun in Portland-based All Girl Summer Fun Band (AGSFB). And the girls just released a brand new album called Looking Into It. The frenzy of guitars may seem like a 1990s throwback, but that’s just because to sound like anything outside of bubble gum slut in 2009 is seemingly an anomaly. So when did they start working on Looking Into It? Says Kim Baxter, “We’ve been working on some of these songs for years but we officially started recording the album in 2007.”

Baxter, who also plays in The Thermals, is working on a solo album and hopes to be finished sometime soon. “I’m still trying to recover though from recording the new AGSFB album. That was really exhausting! Fun, but exhausting!” Foster also records her own material at home from time to time, under the name Butterfly Transformation Service: “I love recording on my four-track!” Baxter says the local music scene is really diverse and supportive.

I asked the girls if MySpace and other social tech tools are helping or hurting in general. “I think it is helpful to have various outlets for a band to promote themselves versus just touring all of the time,” says Baxter. “We definitely

have people stumble across us through MySpace. It’s fun for us to come across fan videos on YouTube and to read reviews on blogs. Adds Foster, “Yeah new media is a huge industry, and for a lot of people their main source of news, entertainment, culture, social networking,

etc. So yeah, I definitely think it helps. But people still tell me they got into us because a friend put one of our songs on a mixtape or mix CD, which is awesome.” As for the band’s future and personal mantra, the girls have a healthy working outlook. Baxter says making the kind of music you want to make and pushing yourself

musically with each new song is a big part of what AGSFB is about. “When that feeling isn’t there,” Baxter concludes, “stop doing it if it’s no longer fun.”