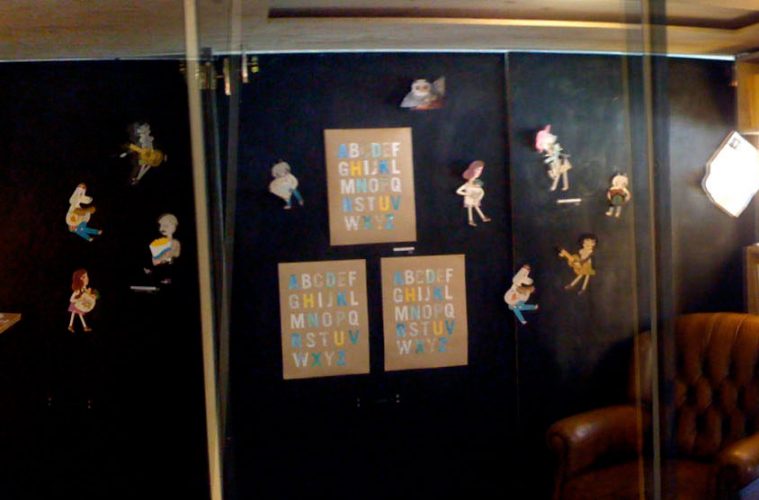 Creating a Zinester’s Paradise in Berlin

Leah Buckareff, formerly of Toronto’s City of Craft festival, has taken her long-standing love for zines across the pond to Berlin. Over the last two years she’s lived on and off in the German capital where she began an exhibition series called The Wunderkabinet. The third in this series is currently on display in the newly established European Etsy headquarters in the Kreuzberg district. What she’s built here is a zine-lover’s paradise.

Called The Reading Raum, it is a vast collection of zines situated in a giant rolling wooden box, nicknamed “the turtle.” The space itself is all hand-woven carpets, soft lighting, artful displays of reading material, along with a leather recliner. As Buckareff works her way around the room, handling the zines in her care, she tells the back-stories behind how each one arrived. There’s the work of Rok Pregelj, a zinester from Ljublijanja, Slovenia she met while on tour with her musical project, Nadja. They got to talking about zines, Pregejl said “oh yeah, I do that” and shipped free zines for Buckareff to display. In return, Buckareff set up a PWYC jar by his work to pay for the shipping. The comics collective Renate became one of the Raum’s most ecstatic contributors, handing over scores of books from its 20-year back catalogue and library. She actually had to turn away zines from Papiertiger, a lefty archive in operation since 1984, because the zines they offered were too rare.
The Raum is also filled with the work of Buckareff’s friends from Toronto: Shannon Gerard, Becky Johnson, stef lenk (who is currently living in Berlin, too) and pas de chance. Many of the zines come with acid-free tabs that read “Please read me, gently” (such as on her personal copy of Gerard’s Unspent Love) or “OMG Look at me!” to encourage browsers to pick up the delicate-looking zines.

Unfortunately, the Raum is only on display until August when the zines go back to their respective homes. Buckareff is looking for other ways to the keep the interest in zines going. “The paper aspect of the Raum is really what I wanted to do here in Berlin,” she says. “A lot of people have been inspired by the room. I’ve thought of going mobile somehow and doing pop-up shops in parks on weekends. Recently, I did a zine-making workshop and people went nuts; they were writing manifestos. Everyone was totally into it and they had never seen a zine before.” (Laura Trethewey)

Not in Berlin? Visit The Reading Raum virtually at thewunderkabinet.wordpress.com.