Rosco Perdu sits under his impressive Chippendale desk brushing his teeth. He is cross-legged on the plush Wedgewood-blue carpet, and surrounded by spent toothpaste tubes; some rolled up, others simply twisted and discarded. The orphaned lids are assembled on the floor in a line that resembles an ammonite, or the concentric swirls of exiting water down a drain. He hiccoughs, and in the time it takes to swan another curl of toothpaste on his brush, he notices the buttons on his shirt. He’s a tall man, ectomorphic, so it’s difficult to sit under this desk, but requires that his fitted white business shirts have more buttons than, let’s say, his father, Mr. Farquhar Perdu. Farquhar was a short ass. Rosco is at least six feet, eleven inches tall; his height gifted undoubtedly from his mother, Celia, who towered over Farquhar. Piled on top of Rosco’s desk, and on the floor to the left of his lair underneath, are the fresh, plump tubes of the toothpaste he is so intent upon; the labeling clear and bright, Dent-O’s ‘Taste-O’ the South’ Bourbon Mardi Gras. This is the Dent-O Company’s newest success that, much to the surprise of the public, and the shareholders, and now Rosco, not only keeps cavities at bay, but takes the stress out of the day at 80 proof. Rosco Perdu, the CEO of the Dent-O Toothpaste Company, is blasted.

On the back of the tube, in very small print, is a warning, ‘Do not brush and drive. This product is not a meal replacement. Keep away from children.’ Then, below, are the insignias of various dental associations, and the area gaming and liquor control board. Rosco knows his father, if he were still alive, would be wary of ‘Taste O’ the South’. He would wonder if bourbon represented an appropriate direction for a toothpaste company in its 78th year.

Farquhar is raised an only child in cold, damp England. His parents, run a Rock Candy concession out of the window of their camper van and Farquhar eats not much else other than the hard, sugar-laden treat. His mother feeds it to him in a bowl with milk in the morning, between two slices of bread for lunch, and slathered in gravy for dinner.
“Lucky you,” she says. “’N’ought a penny to pay for such a treat. Others ‘d give their eye teeth for such delight.”
If it weren’t for the milk and the bread and the gravy, poor Farquhar might perish. By his early teens, he has few remaining teeth and plucks the last one while stowed away on the ship that brings him to America. He glares at the stub of rotted enamel and vows to succeed in life. Five minutes later, he steals the teeth from Taffy, a ventriloquist’s puppet he finds stored in luggage. He pops the enormous wooden set in his mouth and after the ship docks, appears incredibly happy stepping onto the pier. Within the first week, he secures a job at Ye Olde Phosphorous Paste Company as a product tester back when product safety wasn’t a consideration. Thanks to his fake teeth, he is able to, for a time, endure many nasty, yet minty toxins along the course of a workday and soon finds himself promoted. He marries tall, sideshow, Celia whom he meets at a circus while he is out stealing more teeth. They have Rosco, and Farquhar rises to company president and changes the name to Dent-O before succumbing to the virulent and robust accumulation of all of his work toxins as they present in the form of barn painter’s lip. This little-known malady is normally unique to the barn painters who test the integrity of their paint by dabbing it onto their lip or tongue. Too much, or too little water in the paint is easy to divine by such method. Unfortunately, after years of testing, the painters usually end up with an angry-looking lip that comes shortly before their demise. Farquhar Perdu’s lip is bigger than his head when he dies. He tries to give his son instructions on how to run the Dent-O Company, as he hands over the reins, by telling him that,
“Change is necessary. Change is good.”
But all Rosco hears is,
“Mange an estuary. Mange en nood.”
He figures his father is simply going bonkers. Bonkers. Rosco, himself, is not that far away from bonkers himself right now.

“Giselle. What ever happened to just making a thing. You know, so you can have some healthy teeth and then go do a thing, like plow a field or buy some beef jerky. Everything’s like this. Nothing is what it is. Shampoo doesn’t just clean your hair. It can get you a laaaw degree. Aftershave can make you a good bronc b-buster. Hey…fellas…buttons. Buttons. Buttons are buttons.”
He pauses and maneuveres a slow complete turn in his chair. Buttons don’t highlight your shortcomings and make you feel you need to be better somehow…Joe. Joe is Joe. Maybe…maybe we don’t need to hol’ ‘im?”
“Damn it, Rosco. Learn from this. Don’t let your father’s tragic lip death happen for nothing. Learn. So Bristle’s up right now. Well? So? Raise the bar! Don’t make me pity you.”
“Giselle. Giselle I…I think I’m getting something.”
He stands.
“Allen, I have an ideeea. More coffee. What kind is that, by the way?”
Allen has a fresh cup in Rosco’s hand before he finishes the sentence.
“Epiphany Roast, Sir.”
Rosco drinks and thinks. He puts his cup down. He takes up a marker, staggers to the whiteboard and writes TRUTH.
“This, I thinnnk, may be the peak, my friends. TRUTH. Allen, call research and get ‘em up here.”
“I just did, Sir.”
“This is it. This is aaall. This is the game-sh-shanger. Truth. Likeability’s sooo tepid. So safe. Bristles won’t know what hit him. An’ right on its heels, before he can blink, we’ll launch EMPATHY/COMP-P-PASSION. An’ finally, finally, we’ll hit it outta the park with ESCAPE, ‘cause the real world is too mush for p-people. I’ss too mush for anyone. Hol’ ‘im Joe. That’s all.”
Rosco throws the marker down and sits. Giselle helps him put on his shirt. He snorts and looks down as she does up his buttons.
“I love you fellas. An’ I love you Giselle. You’re sooo nice. Hey fellas! See how pretty my wife issss?
“Is that the truth or is that the toothpaste talking?”
“The fellas love you Giselle. They think you’re swell. An’ buttons don’t lie. Neither do I. …’Kinda rhymes.
“You realize truth could mean the end of this business?”
“I know. No more Heroine…but that outfit! We’ll juss’ make toothpaste. ‘Had to happen eventually.”
They all look at the billboard, and toast with a round of Bourbon. 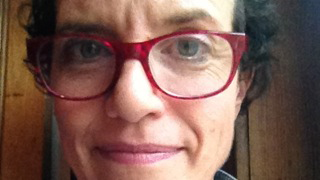 Suzanne Crone has been writing forever. ‘Born just after the Big Bang, she’s seen a bit. ‘Raised up two fine fellas that can verbally spar like champs. She has a BA in English, a certificate in PR, and after some psych at Ryerson conducts her own experiments using dryer sheets and Scrabble scores. She’s had four essays published in the Globe & Mail in 2007, has written two novels(editing one now) and a bit of some pretty-alright poetry. She loves the creative process of writing and the thrill when ideas blossom.  She loves a well-turned sentence.