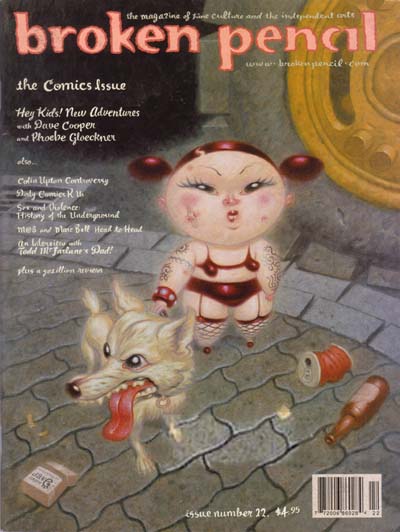 The first issue of Broken Pencil I ever contributed to was the comics issue back in 2003. In that issue I wrote about the very first edition of the Toronto Comics Arts Festival, an event that moved from a bi-yearly occurrence to a highly anticipated, yearly, comic-lovers’ dream.

Unfortunately we do not have my TCAF review online, and I’m too busy getting ready for the 10th anniversary edition of TCAF to type it up and post it before this year’s event is over. However, in that very same issue of BP, Beguiling owner and TCAF founder Peter Birkemoe wrote a guide to talking about your love of comics without freaking people out. I don’t think that will be a problem this weekend, or nearly anywhere anymore, but let’s peek back to 2003 when maybe it was still considered “nerdy” to be into comics.

Enjoy this blast from the past, and come visit Broken Pencil at TCAF this weekend to pick up our new issue — which is sort of our second comics issue — which features a profile of ardent comics supporter and publisher Annie Koyama.