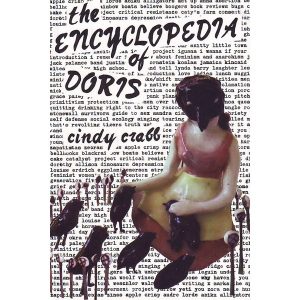 Cindy Crabb is the author of the long-running, autobiographical feminist zine Doris. She is also the editor of the zines Support and Learning Good Consent, and is a sexual assault survivor advocate. Her new book The Encyclopedia of Doris is now fresh off the Doris Press and she’s on tour, reading from her new work. This weekend, she’ll be in Guelph and Toronto, reading alongside other veteran zinesters.

Sarah Mangle, of the blog These Things that People Make, talked with Cindy about embracing the word “feminism” and her new book.

SM: Can you tell me the story of putting together the Encyclopedia of Doris?

SM: I think that’s interesting: what we permit ourselves to write about or to not write about and then the devices we use to get around our own censorship.

SM: How do you relate to the word feminism?

CC: I know a lot of women who don’t consider themselves feminists who I think would really benefit from embracing feminism and the idea that feminism is about creating a world where people are equal humans, and not objectified. As opposed to the white middle class feminism that came to the rise in the mid-eighties. The feminism that’s been articulated by women of color and queers and some of the beginnings of second-wave feminism was much more radical. People can really benefit from [feminism] personally and in the world. I love feminism. I’m going to re-start the feminist movement. (laughs) I’m trying to talk about this a little bit more because feminism just seems so vilified for some not very good reasons.

SM: Why do you think it’s vilified?

CC: Middle-class white feminism took over and, people couldn’t relate to that at all. Right-wing talk show hosts had a real successful media campaign where they turned political correctness into a total joke. That was a well thought out and successful campaign to make women look silly and make anybody who talked about the domination of women and queers look like reactionaries and its just really taken hold. The hipster irreverence is a product of right-wing media. Its depressing.
There’s some pretty big mistakes that a lot of second-wave feminists made. There was a lot of racism and queerphobia and transphobia and because the word feminism got really attached to second-wave feminism and then middle class white feminists. There was really important political critiques of those movements that then just became critiques of feminism rather than expanding feminism to mean what it was meant to mean.

CC:A lot of times people say, “Well, we need a new word.” But you know, it’s a plenty good word. And that’s sort of how anarchists were forever, saying, “We really need a new word.” And its like, “Well, that’s fine, but also it’s a good word.” It has a long history, and the history is always changing. It’s not an idea that’s stuck in its original form. It’s a political idea that can change and improve and adjust to a more and more radical perspective. So that’s what I hope for with it.

SM: I wonder,  how do you think we’ll get there?

CC: People working together. People of different class and race and sex and gender backgrounds working together to create a real strong movement for full humanity working in all forms. Community work, and media work, and social justice and childcare and just every single thing that we could possibly work in. Get people moving forward with it. The usual.

SM: What do you want your book to do?

Cindy Crabb and Jeff Miller of the Ghost Pine Fanzine (Montreal) are reading at The Dragon Bookstore, in Guelph on October 2nd, and in Toronto at the Tranzac with Tara Michelle Ziniuk and Laura Mac on Oct. 3rd, at 7pm.