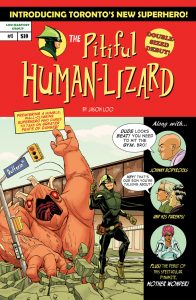 Lucas Barrett is a 9-to-5, twenty-something office drone by day, but by night he uses his publicity hound father’s greatest invention to stick to walls and become Toronto’s first homegrown superhero —The Pitiful Human-Lizard. Why pitiful? Well, other than his father’s super sticky glue, Barrett has no superpowers and must make due catching rides on top of TTC streetcars to get from one emergency to the other and training at one of Toronto’s local Brazilian Jiu-Jitsu gyms to keep himself battleready. His secret lair is his not-so secret
apartment, and he volunteers in medical studies to make extra money between nightly patrols. Funded by a highly successful Kickstarter campaign, this self-published, full-colour double issue is printed on glossy-magazine paper under a shiny and durable cover, which means it can stand on the rack and be mistaken for a work
from the heavyweights over at DC or Marvel. Inside is a story that — at least in its more mundance elements — most young singles can relate to. Barrett juggles battles with villainous monsters outside local landmarks like the Art Gallery of Ontario with work, dating, and Sunday dinner with his folks. Less akin to the real-life superhero exploits in Kick-Ass, and more like Image Comics’ Invincible (if “Honest” Ed Mirvish was Stan Lee) author Jason Loo provides the right mix of humour, quarter-life crisis ennui, action, and a compelling story that answers the question: “Why would someone fight crime in a lizard suit?” The art is detailed enough that local landmarks and intersections are instantly recognizable, but exaggerated enough to give off a ‘60s-era Marvel vibe. (Aaron Broverman)