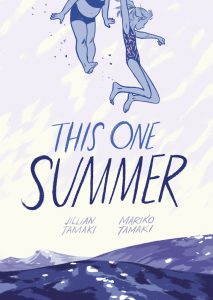 Mariko Tamaki and Jillian Tamaki, who brought us Skim in 2008, have solidified themselves as the dream team of young adult comics. But their latest feat transcends the young adult genre. Instead, as This One Summer follows summer friends Windy and Rose to the cottage town of Awago Beach, it effortlessly transports readers of all ages into the nostalgic realm of teenage summers. Rose and Windy remain powerful and relatable characters throughout their apprehensive transitions into adulthood. They’re two girls who are just trying to focus on the important stuff: boys, boobs, and The Texas Chainsaw Massacre.
This One Summer is a vivid and genuine portrayal of girlhood, but the Tamakis resist young adult clichés by juxtaposing this with the harsh realities of adulthood. Jillian Tamaki impresses in her ability to evoke a poignant sense of nostalgia within a single frame, while This One Summer’s plot always jolts us back to reality. The palpable tension between Rose’s parents, for instance, infiltrates the entire story, and peaks beautifully alongside illustrations of shattered glass from broken dishes.
While This One Summer deserves praise for its authentic depiction of what it means to be on the cusp of childhood, it also succeeds in conveying complex familial relationships and friendships with fluidity and ease. The site of Awago Beach breaks down generational barriers, adult responsibilities and distinctions between public and private realms, allowing for a moving and unforgettable story with a stunning climax that renders This One Summer a worthy book for any season. (Chloe Stelmanis)