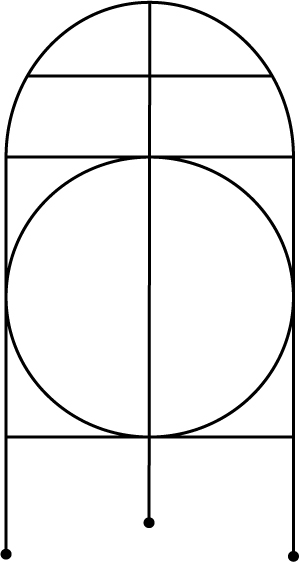 Above: A sigil by Peter Dubé from his book Conjure.

Editor’s note: “The Smell of Our Own” is a brand-new Broken Pencil column where we enlist an artist to interview another artist they admire. If you would like to contribute, please send a query to [email protected] Enjoy!

I’ve known Peter Dubé for over a decade now. I’ve read his wildly imaginative novels, his expansive and informed essays, his deft art writing. He’s another one of those writers I am constantly telling people about, because this is Canada and we hate our own clever people.
When Peter and I get together, Holy Unholies! The bitching and gossiping and withering, liquour-pushed (OK, pummelled) running-off-our-mouths commentary … well it would, as my Mum in New Brunswick said, scald the heavens. Just the way we like it. Peter is enormous fun; a chronic giggler with a cat’s eye in the middle of his forehead, a classic Montreal Anglo bon vivant, that rarest of an already diminished species.
And yet, there is another Peter, one that was hidden to me until I read his latest book Conjure: A Book of Spells. This is a Peter Dubé who practices and studies magyck, or magic, witchcraft, divination, Wicca (so many words for one eternal pursuit) — a practice that requires great stillness, of mind and body and tongue. Who is this other Peter, and where does he hide when the bar lights are turned off?

Conjure is structured as a grimoire; a sort of how-to book that teaches you how to, for instance, rid yourself of a pesky extra-natural presence, speak to dead relatives or levitate. Dubé ‘s grimoire, infused with a queer sexuality and textuality and an incantatory prose-poem flare, will give you all that.

The great pleasure in reading Conjure comes, however, from the fact that no matter how psychologically complex and/or mystical the desired outcome — or the methods employed to gain said outcome — the book’s sharp, blunt lyricism never devolves to shop-worn fantasy iconography or easy horror show pyrotechnics. This is magic for the real world; for your world. Conjure seamlessly fuses the mundane application of household items (no bat’s eyes or hanged man’s hair needed here) with high meditation (and, yes, arousal). And it reads the way perfectly baked, treat-packed layer cake tastes, at once precise and extravagant.
Chatting with Peter about Conjure, I learned what I had long known subliminally — Peter is a no-nonsense occultist, a wizard with a work ethic.
RM Vaughan: How did you become interested in the occult, and how that has interest manifested in your work?

Peter Dubé : The occult is part of a group of closely related interests I took up during adolescence and that have informed my intellectual life since.  Along with occultism, this group of ideas notably includes surrealism and the work of some radical gay liberation writers and thinkers active in the sixties and seventies. I guess one of the things uniting these interests is the way in which they all constitute technologies of self-creation and liberation.

RMV: What is the relationship between the occult and queerness?

PD : Queerness and the occult are inextricably linked in my mind. Of course, when you take the time to do a little research they’re linked historically as well. On the most basic level, I suspect this phenomenon has something to do with seeing the world from an outsider’s perspective.

RMV: Your work circulates widely, but you are markedly outside of the mainstream of CanLit — do you think CanLit has a problem with speculative/alternate reality work?

PD: The short answer would be to simply say “absolutely.” But, to expand… although I obviously can’t say that the exclusion of dissident visions in mainstream publishing is deliberate per se, the public face of CanLit does seem afflicted by a kind of dour earnestness and narrow pragmatism; it tends to reductively equate “seriousness” with a particular kind of old-fashioned realism, and with looking backwards towards “history.” And it often identifies the world of dream, vision and imagination with frivolity. Given this, I am grateful to have found my way to [an audience].

RMV: How does your work function in occultist circles?

PD: Although I have drifted in and out of the orbit of various occult-type circles over the years, I think I’m too damned independent to actually settle into any group. However, since people in occult circles tend, happily, to be readers, I believe my writing is probably received and read as [occultist] first and foremost.

RMV: Why did you choose the prose poem format for Conjure?

PD: I have a longstanding literary interest in hybrid kinds of writing like the prose poem; I like forms and ideas that take chances and interrogate received wisdom in general. This led me to remark, in my reading of grimoires (which has spanned a couple of decades), that one of the fascinating things about them is how they contain many different kinds of writing: mini-narratives; incantations and conjurations with impressive sounds and rhythms; catalogues of ‘names of power” and hierarchies of various spirits. Grimoires are deeply hybrid texts themselves.

RMV: Why is the occult so suddenly “fashionable” again?

PD: I believe there is a human desire for a deeper, more multifarious, and more complex sense of reality …. Right now our culture gives a particularly impoverished idea of productivity and the instrumental pride of place, so I’m not surprised that – in the best dialectical manner – a hunger for the visionary or the marvellous rises up in counterpoint.