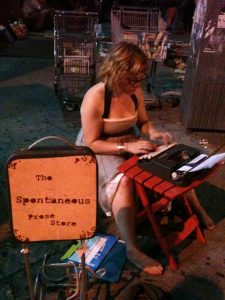 Walking down the street you pass a young woman seated at a typewriter, tapping away. You stop to look and the typist chirps: “Hello! Welcome to the Spontaneous Prose Store.”
The typist is poet Kaile Glick who spent the summer taking her typewriter to the streets of Toronto, offering passersby a personalized prose poem composed on the spot. Give her a title, subject or first line — and a pay-what-you-can donation — and she’ll compose a little piece of literature before your eyes.
Here’s a sample: “Can I Steal A Cigarette/& could I walk you home/tomorrow there will be a/market & yesterday the sun/went down accidently we/began all over can I/steal a cigarette &/could I walk you home.” The poem comes typed on convenient sticker paper: to peel and paste wherever you please.
Recently returned to Toronto from San Francisco, Glick shamelessly admits to ripping the idea off from a busker there. But what’s a little intellectual theft in the service of recreating San Francisco’s lively lit scene in Canada? Reminiscing about the West Coast city where she spent the last four years, Glick recounts weekly readings at the top of subway station escalators and crowds of poets converging at street corners to shout poetry (“like a slam without the competition”). Back in her hometown, she found herself missing that playful camaraderie: “It seemed like the Toronto reading scene and the slams were not quite the place for the kind of work I’m trying to do,” she says.
After a lengthy search for the perfect lightweight typewriter to haul across town (a slate grey 1950s Smith-Corona Skywriter), she set up temporary shop at the corner of Bloor Street and Brunswick Avenue in Toronto’s Annex neighbourhood. For what amounts to unusually literate panhandling, Glick has experienced a surprisingly low level of indifference or flat-out hostility: most passersby at least smile, many pause to ask what a Spontaneous Prose Store is and quite a large number buy poems. The average donation is around two dollars, but one patron paid 20 bucks for a poem to his wife for their wedding anniversary.
Throughout the summer the shop was on the move, visiting multiple locations across town. With the help of carbon paper she uses to make copies of her writing, Glick hopes to eventually compile the poetry into a book. Other dreams of hers include: “Meeting other writers, getting better at my own writing, hiring The Store out for parties and eventually starting some sort of counter-culture revolution.”  (photo by Gillian Sze)