What’s the big brouhaha over 3D printing? Broken Pencil explores the fun (and obstacles) of the medium 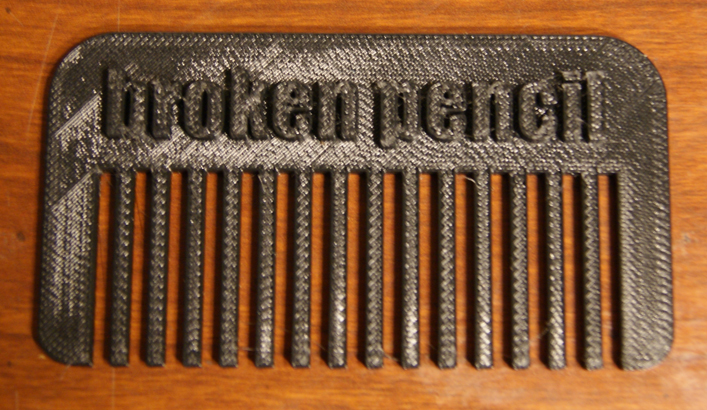 Media love to tout the so-called 3D printing revolution. Articles in Wired and the like trumpet the process as an “industrial revolution in the digital age.” They make it sound like the technology, “printing” computer generated designs layer by layer, is as easy as 1-2-3, something done as automatically and with as much intellectual rigor as a hungover student cut–and-pasting an essay. The truth is, 3D printing, which isn’t nearly as new as the hype suggests, remains a complex and, to some extent, inaccessible process.
3D printing has been available to manufacturers since the early ’80s, what is new about it today is the availability of the technology to the average person. Once exclusively the product of manufacturing industries, small, home-use 3D printers such as the MakerBot and the RepRap have brought 3D printing to street level. Today, creators from furniture designers to artisan jewelry makers to archeologists to cutting-edge conceptual artists are getting interested in 3D. There’s even a professor working on a 3D machine that outputs its designs in chocolate and a group running one that prints in sugar.  And, to a surprising extent, the rhetoric around 3D is very much attuned to the do-it-yourself ideals of zine culture.
Neither Bre Pettis nor Adrian Bowyer (the creators of MakerBot and RepRap, respectively) are linked to a corporation, nor are their printers mass marketed through your average electronics store. Both created 3D printers as a way to put the tools of big businesses into the hands of citizens. The philosophy behind UK-based professor Bowyer’s RepRap (Replicatable Rapid Prototyper), for example, is to make a printer that is open source and can replicate parts of itself so that one printer can give birth to many others. It sounds fantastic, but there are two significant downsides to these printers. First, the price tags on both machines range from $500 to $1,500. Second, both printers require significant technical know-how and experience building and operating complex machines.
But don’t write off 3D printing just because of its current costs and complexity. Being a relatively new field, it’s still possible to get in on the ground floor of three-dimensional printing.” Much of the work being done with 3D printers originates from digital trailblazers, but there are many opportunities for artists and crafters to put these machines to new uses. Comic artists, authors or videogame makers can make figurines of their characters; jewelry artisans can make their own beads or molds to cast metal pendants; photographers might make practical tools like tripod attachments and artists can make sculptures of various complexities. Zine makers might even consider making stands to display their work at zine fairs or nameplates bearing their zines’ titles. But maybe the best thing about grassroots 3D printing is that we don’t really know what to do with it yet. This is a wide open technology that gives the tools of making relatively complex objects back to individuals working on a do-it-yourself basis. Depending on your modeling skills and how much energy you want to put into learning the process, the only real limitation is your imagination. 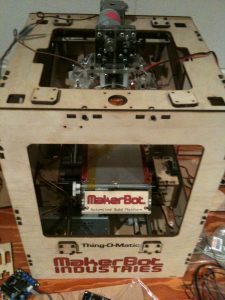 3D printers are expensive: that’s the bad news. The good news is there are a number of ways you can gain access and experience with 3D printing without purchasing your own printer. The easiest of which is through Shapeways, a website where you can use web-based software to design your own 3D models, submit the model for printing and receive a printed piece in the mail. If you don’t feel comfortable using the modeling software, you also have the option of choosing from models other designers have made available through the site and customizing them to suit your needs. Some of the more interesting pieces currently available for print on Shapeways include a model of the Herpes Simplex Virus, a lamp that looks like a nuclear explosion and a bikini that touts itself as the entry point to 3D fabricated clothing.
While this route is the simplest introduction to what is possible (and gives users access to printing materials like stainless steel and nylon that home printers cannot yet accommodate) it doesn’t give you the in-person experience of taking your design to the printer and watching it build up, layer by layer, as a nozzle squirts out melted acrylonitrile butadiene styrene (ABS) plastic  to create the shape you desire. It’s a slow but fulfilling process. If you want the full experience, your best bet is to find a lab somewhere in your neighbourhood (or at least the closest city) that offers a 3D printer and lessons in modeling.
Finding one isn’t so hard. Groups across Canada (and in various parts of the world) have purchased or built their own 3D printers and are sharing them with their communities. For example, Ottawa’s Artengine is a non-profit, artist-run centre that makes technological tools available to local artists.  The organization hosts free workshops on how to 3D print and use modeling software and it has a MakerBot Cupcake CNC printer on site for community use. Likewise, Victoria Makerspace — located in Saanich, B.C. — is a workshop space run by “technology enthusiasts” which houses woodworking, metalworking and technological tools for individual and community projects. Derek Jacoby, Ph.D. candidate at the University of Victoria and member of the Makerspace, purchased and built a MakerBot for the space and gives lessons in how to use it. This fall, the group is planning to make a 3D scanner out of the Microsoft Kinect gaming controller so that they can scan objects and replicate them using the 3D printer.
Toronto has a number of 3D printing hubs, including the DDiMITlab which is run by the University of Toronto’s Knowledge Media Design Institute and Faculty of Information. Though DDiMIT (which stands for Designing Digital Media for the Internet of Things) is run by educational institutions, it welcomes drop-in users and, in particular, people who are interested in collaborative projects. I dropped by DDiMIT, determined to design and print my own object. I wanted to see what the average person with no experience in 3D could accomplish. My project: a comb that says “Broken Pencil”, based on a design I found on Thingiverse (MakerBot Industry’s community space where makers share their digital designs). After arriving at DDiMIT, I quickly realized that I didn’t have the skills to do it on my own, but luckily Robert Ree, a U of T Masters of Information candidate who just completed his thesis on 3D printing, was on hand to help. Basing our model on a rounded comb (by Thingiverse user “2ROBOTGUY”),  Ree modeled it in AutoCAD, extruded it into 3D and brought it into Google Sketchup (free modeling software that is supported by video tutorials) to use the 3D text tool to add “Broken Pencil” to the handle. Once we were happy with the look of our comb, we saved it as an STL file to make it compatible with the 3D printer.  Then, we opened the file in Meshlab (an open source program for processing and editing unstructured 3D images) and made sure there were no holes in our model. After ensuring the structural soundness of our digital comb, it was ready to send to the printer. 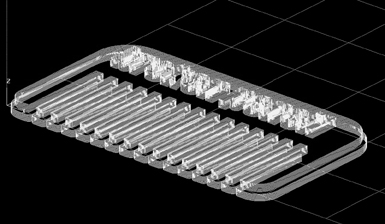 The printing itself is the most mundane part of the process. Everything happens slowly. The ABS plastic heats and forms layers while support structures are built to make the spaces between the teeth of the comb. After an hour twiddling my thumbs, my object was ready to be chipped off of its platform, the support material breaking away, revealing a fully formed comb.
It was overwhelmingly neat to see something go from the computer screen and into my hands within the span of an hour. What was even cooler was bringing the comb to the BP office and watching the staff go ga-ga over the fact that I could “print” a personalized plastic comb. Arts collective blablabLAB recently brought this kind of fascination to the streets of Barcelona with the project Be Your Own Souvenir, which involved digitally scanning people’s bodies and printing mini figures of everyone who chose to participate. In an interview posted on Shapeways earlier this year, the collective expressed their feeling that, by bringing this technology to consumers, people will become more aware of the process of manufacturing goods — some of them might even become makers themselves. Much of the making that is going on over at Thingiverse involves practical things like shower curtain rings, toothbrush holders and coffee cup lids — people finding solutions to everyday problems (and cutting corporate middlemen out of the process).
No matter how you decide to approach 3D printing (even if you decide not to try it at all), the benefits are undeniable. A technology once solely the province of the institution is now available to individuals. We have a new option: making what we want and need, rather then depending on others to come up with what they think we need and then selling it to us. The playing field is leveled just a little bit more.