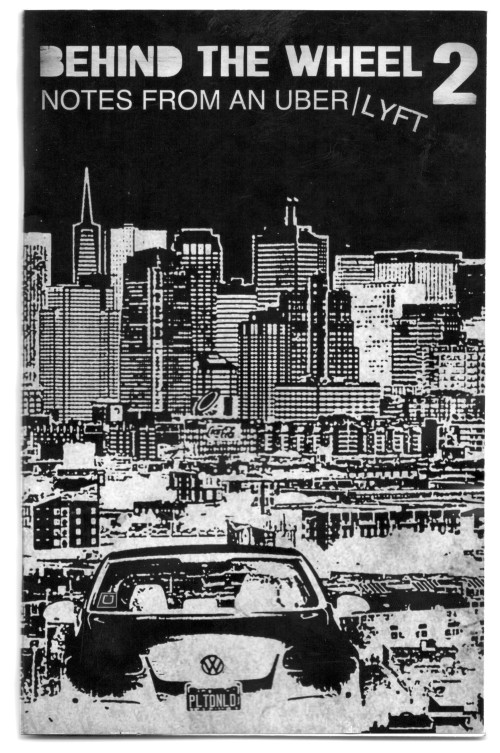 Kelly Dessaint never intended to be an Uber driver. But after moving to Oakland in the San Francisco Bay area from Los Angeles in early 2014, he needed a job – and the one thing he had was a car. The writer and longtime zine publisher (best known for his novel Masque of Infamy and ongoing perzine series Piltdownlad) first started driving with Lyft – a mobile rideshare company that predated Uber in San Francisco. Enticed by a $500 rebate, Dessaint moved from Lyft to Uber, all while chronicling his nightly conversations with SF tech yuppies, drunks and friendlier types in his ongoing zine series Behind the Wheel.

By January 2015, Dessaint finally switched to cab driving – a fraught occupation in the Bay area, where the Uber and Lyft companies have grown bigger and more dominant than ever. He now writes a column about his experiences for the SF Examiner. Broke and currently dealing with an impending divorce, Dessaint still sounds hopeful talking about the cab industry, which has provided him with a sense of community and kinship that Uber never could.

I just finished both your Behind the Wheel zines about your Uber/Lyft experiences. I love that we almost learn more about your feelings about San Francisco and its people than we do about Uber.

It’s like Deadwood here. You can do anything you want. No one’s in charge. Here it’s like the children has taken over the nursery. Why, why do they do these things? It’s fascinating to be here, to see this happen. It’s frustrating and fascinating to see how poorly a city in the United States is run.

That being said, there are positive components to (Uber). Aspects that benefit people. I’m not gonna say that I think it’s evil. I’m not gonna say that the only solution is to abolish it. There were not enough taxi cabs in San Francisco to satisfy a growing need, a growing city. In San Francisco, you can only have 2,000 cabs on the road at any given time. Thousands of people are moving here each month and we only have a thousand cabs to accommodate that? Something has to satisfy that need. Uber and Lyft came in and did it.

So why switch to taxis, if Uber/Lyft drivers are taking over the roads?

The greatest thing about taxi driving is the drivers. I wish I had met these people 20 years ago. When I was living in SF and didn’t know what to do with myself, if I’d had any sense, I would have realized I should drive cabs. It’s a culture. It has its own language. Every time I put an article out, a cab driver contacts me and says “Well, this is a term we use for what you’re talking about.” My last column was about the need to talk about your ride, to purge that information. With cabbies it never ends. In SF, the cab drivers call this “the recitation of the waybill.” At the end of our shifts, we gather round the yard, we tell each other our rides, we go home. It’s our purging. That’s how deep this tradition runs, and that to me is the most significant thing about this. The tradition, the history, the legacy, what it means. 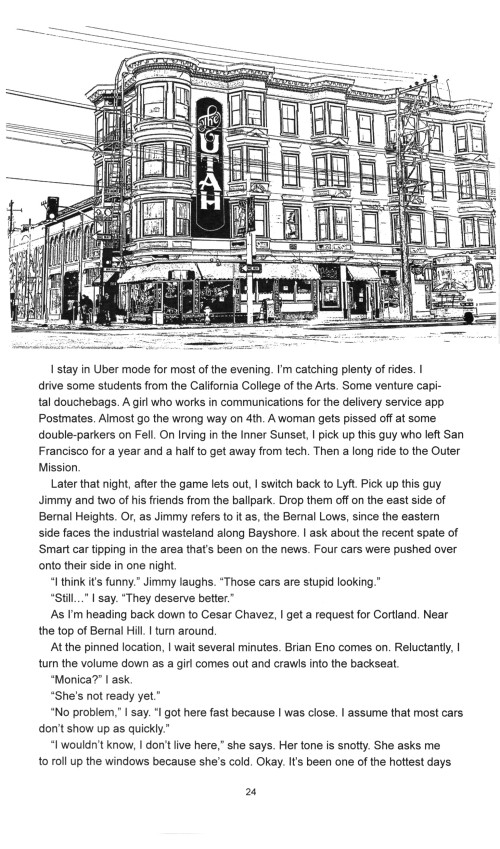 How much money do you make as a cabbie in comparison to what you made as an Uber Lyft driver?

There’s no way to calculate how much you make on Uber/Lyft. What you make at the end of the day, you take away the 20 to 30 per cent cut that the company takes. There’s gas, there’s wear and tear on your car, and you’re gonna need to get brake jobs, oil jobs, all those things. It’s a little nebulous – at the end of the year, if you kept track of everything, you would know.

I’ve heard cab driving described in a way as a karmic quest. I follow instinct. I go where I want to find people to ride in my car. There’s some neighbourhoods that are less desirable – the ones with all the drunk bros, disrespecting me, the car. The other way I make money is being charming. Don’t print that! But I know how to talk, I’ve been around, I am really good at bullshitting, and I can talk. People tip me. They tip me really well for that.

At the end of the day, I take the cab back, I pay my lease, and I go home. I don’t have to worry about this cab getting messed up. If you get an accident with Uber or Lyft, you’re screwed. Your insurance is screwed. All this being said, I’m pretty sure I make more money in a taxi.

Do you think there’s a way to profile the average Uber/Lyft customer?

I can also tell you the conversations I have in cabs are phenomenal. Phenomenal! I’m a part-time therapist, is what I am. I tell people the backseat of a taxi cab is a temporary autonomous zone. You can say or do anything you want. Sometimes people feel like they just have to tell me something.

There are limits, of course. When people start having sex, I don’t really like that too much.

How often had people had sex in your cars?

It didn’t happen as much when I drove Uber/Lyft, because there’s a connection through the app. There’s lots of making out. Blow jobs are really common. I don’t know exactly what they’re doing, because I’m looking at the road, but I can tell you I know what someone getting a blow job sounds like!

How has this schedule affected your life and your rhythms? I’m sorry to hear you’re separated from your wife.

Everyone knows my wife left me – I posted a meltdown on Facebook and deleted it. This one taxi driver has been married for 16 years. I asked him if he’d always been a day driver and he said no, I started out at night. I said, well how did that affect your marriage? He said he decided I needed to become a day driver because he was missing his family. When he stopped and started driving daytime, about 15 years ago, his wife said: “Hey, you’ve come home to us.” It probably saved his marriage.

Other cab drivers have told me they’ve lost marriages and relationships because of the night driving. My wife did not like it. That’s not why she left me, but she didn’t like it. She’d wait up for me, she was worried, she was scared. With Uber/Lyft, she’s worried our car would be destroyed and we’d have to file bankruptcy, with our finances already so close to the edge. People jump out of airplanes, they bungee jump, they ride motorcycles. They do things that are risky. When you have a wife, family, kids – you don’t do those things, because there’s more at stake. If you drive Uber/Lyft, make sure you can balance life. Driving nights each week, it was not worth it.

It seems like you’ve found a really great community of taxi drivers who can listen and empathize with you.

I don’t know why it is this way? In my own life, I never had the kind of friends I have now, that I got into taxis. I never had that in my entire life. I had one or two friends. I go into the yard, all these guys are talking to me. They want to help me – they do things for me! They go: “You’re one of us. We see it. You’re always gonna drive a taxi. You’ve got it in you.”

The whole Uber/Lyft thing – if they kill San Francisco, they kill more than the taxi industry. Of course taxi companies are corrupt. All that money that goes through – my god! They will lose some of the greatest people I’ve ever met. It’s like zines – when I started zines, those people became my friends. These are things that connect you to people – that have significance.

You can read Kelly’s writing about driving Uber, Lyft and taxis (and order his zines) at idrivesf.blogspot.com and at sfexaminer.com/author/k__dessaint.