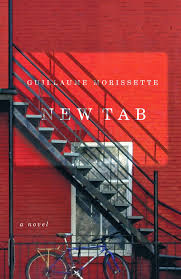 This book is straight-up great. If you’ve ever felt torn between school or work or housing or anything else, you’ll identify. Morissette perfectly captures that in-between feeling.

Twenty-something Thomas lives in Montreal, and works at a video game development job he hates. He feels trapped between languages and cultures — no longer comfortable in French or English. Morissette creates a nuanced portrayal of the protagonist’s inner life by showing us the random firings of the brain, like, “Hungover at work. ‘Endurance,’ I thought.”

In the hands of a lesser writer, this introspection could come across like so much emo navel-gazing. Instead, Thomas’s trials seem fresh and very funny. In one section, Thomas ponders who buys the video games he helps to create: “Forty-year old housewives? Karate instructors wearing combat pajamas, bored and waiting for the bus? An alien sitting at a shiny and curvilinear work desk, seeking escape from the disappointing reality of having to fire red beams at Mayan temples?”

New Tab is written in a very straightforward style slightly reminiscent of Tao Lin, informed by online language. Morissette uses Facebook status updates, chat conversations, Google searches, YouTube suggestions (“Cute Lemur Enjoys Rice”), all in a subtle, ‘this is just a part of regular modern life’ kind of way, not hitting you over the head with ZOMG SOCIAL MEDIA AMIRITE ZEITGEIST. I’ve had conversations with writers who say they have a hard time writing realistic portrayals of social media: to those writers and all others, I say read this book and see how it’s done. Morissette negotiates the absurdity of modern life with humour and tremendous heart. (A.G. Pasquella)