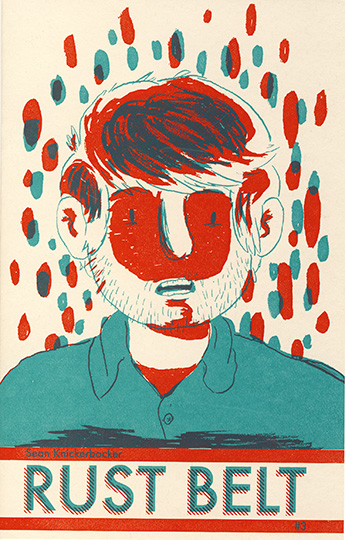 Rust Belt
Comic, Sean Knickerbocker, #3, goodpalsprinting.com
Well, that was a bit of a bummer!

Rust Belt tells the story of David, a toe-haired fella who struggles with the bottle.
Um, that’s kind of it. And it works. How it works is by not adding any theatre to the
world of addiction. Everything about this comic is fairly ordinary and in this sense, it’s the
ideal presentation of an entirely unglamorous affliction.

Creator Sean Knickerbocker (cool name/fake name, BTW) seemingly sought to
depict a mundane, kinda depressing reality, and he does a great job of doing just that. His
narrative is populated with characters sporting weary facial expressions and postures that
reinforce the tone and narrative of this comic.

It doesn’t really go anywhere (at least in this issue) and that’s just fine. It comes off
as highly relatable for anybody who’s ever had to grind through something and not crest on
any sense of sensationalism–good, bad or otherwise. The story is basically just… there for
anybody who picks this up. For an obviously hand-drawn comic, Rust Belt never comes off
as inauthentic, and that’s a feat within itself. (Cam Gordon)