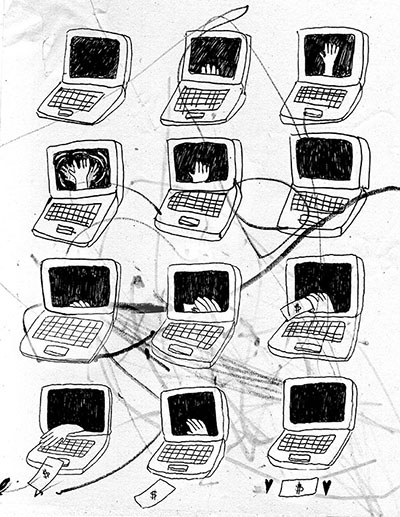 Anxiety. Depression. Brief glimpses of joy – and then back to jittery hand-wringing and nervous pacing. It sounds like the typical emotional arc of an artist, right? But the roller coaster filmmaker Duncan Finnigan experienced had nothing to do with his creative process, and everything to do with crowdfunding his project via Kickstarter.

Finnigan was looking to fund his 12 Angry Films project – a series of short works exploring stories about gender, cultural identity and mental health, among other subjects. The Waterloo, Ontario-based filmmaker turned to the popular crowd-funding platform to look for financial help, hoping his friends, family and other interested parties would back his idea with micro-donations. He needed $12,000 to help pay the many filmmakers and assistants involved in the project. By the end of the crowdfunding campaign, 26 backers had pledged $1,775 —- an amount well short of his financial goal.

“It was a waste of time fiscally,” Finnigan says, “and I didn’t figure that my emotions were about to go on such a rollercoaster ride.”

Finnigan’s tale is miles away from the image most of us have of crowdfunding: it’s tempting to look to campaigns like the one that funneled $1.2 million towards musician Amanda Palmer’s new album, or the $3.1 million donated in 30 days for Zach Braff’s new film as sources of possible inspiration. Even in the relatively low-stakes community of Canadian poetry, poet Shane Koyczan managed to garner a jaw-dropping $91,000 in pledges to back his third book. But Finnigan warns against getting starstruck.

“It’s hard work — and be ready to put everything on the line for your passion,” he says.

Crowd-funding platforms such as Kickstarter, Indiegogo and PledgeMusic are fast becoming funding avenues for artists looking beyond government grants, bank loans and merch sales. When an avenue of traditional funding is exhausted, one can’t help but wonder if it’s better to move towards quick micro-funding for your art project based on a solid idea, catchy video and a 1,000+ Facebook Friends list.

The success stories work as a tease to artists hoping to launch a project, but what makes a crowd-funded project work — and how can artists avoid common pitfalls?

First, it’s all about the hustle. Self-promotion becomes breakfast, lunch and dinner for the crowd-funding artist, according to Jake Smith, lead vocalist of Montreal band Lakes of Canada. In 2012, they launched an Indiegogo campaign to fund their debut album, ultimately raising $11,147 USD. Inspired, the musicians chose to launch another campaign this year for the next record. It was far from easy, though, Smith says.

“You have to be on Facebook and Twitter a lot, and when you’re constantly asking people for money, well, you can be annoying,” Smith says. He estimates 30% of donations came from “the huge families we all have in the band” while fans donated the rest after heavy promotion via social media and e-newsletters.

Smith advises artists to vary the use of social media call-outs; one day, get on Facebook to promote the campaign; the next day, tweet the Kickstarter link. But overusing social media all at once can barrage your fans with too many gimme-money requests. And don’t just rely solely on donations from crowd-funding. Smith says his band still applied for grants and toured to raise money while the campaign racked up the pledges. 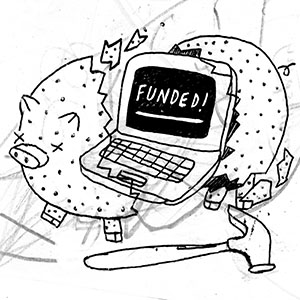 Crowd-funding newbies might think, “My project is so awesome that everyone visiting Kickstarter will check it out and fund me out of the blue! I don’t have to just rely on people I know.” Don’t trip while wearing those rose-coloured glasses; the many projects funded on Kickstarter by passers-by are not launched by young zinesters but by engineers creating the next-gen headphones or futuristic watches (the Pebble watch raised a record-breaking $10 million on Kickstarter). Tech and gadget visionaries do well on crowd-funding sites; poets, choreographers, visual artists? Not so much. That’s why some consider Kickstarter a Skymall for nonexistent products.

Reality sets in quick when you learn that out of nearly 63,000 projects funded on Kickstarter (t date) about two-thirds have raised less than $10,000. In contrast, artists can apply for three levels of Canadian government grants and earn well over $50,000 altogether. While creating a quick Indiegogo campaign might seem initially appealing to exhausted artists who wish to focus more on their craft, crowdfunding often creates the opposite shift in priorities. In short: keep those grant opportunities bookmarked.

So what can a crowd-funding campaign offer you — even if it flops? Exposure is still a valuable commodity for all artists. Frederick Glaysher sought to fund a performance poem for a stage adaptation and received only $411 of his $9625 goal, but he doesn’t sound too dejected.

“Several people visited my page once I didn’t reach my goal and told me to not give up, expressing respect for my project,” he says. A crowd-funding campaign naturally creates a community of support for a project.

If you do get funded, it’s important to keep this simple credo in mind: Finish what you start. Take Neal Stephenson as one example. The spec-fiction author raised more than half a million dollars to fund CLANG, an ambitious motion-controlled sword-fighting video game. Despite donations far surpassing the campaign goal, Stephenson’s team admitted they needed more money to produce the game, leaving backers in limbo regarding their donations and rewards. (As of September 2013, the production was still on hiatus.)

The team updated their Kickstarter page with a long explanation of why the game production was paused – citing Stephenson’s fans, development hurdles and the video game industry itself – but after all this, it’s clear that the team didn’t take the logistical challenges of creating a game into account. “Kickstarter is amazing, but one of the hidden catches is that once you have taken a bunch of people’s money to do a thing, you have to actually do that thing, and not some other thing that you thought up in the meantime,” the team wrote on their Kickstarter page.

Lesson learnt, artists: Don’t promise one thing and deliver another. Don’t shortchange your backers, because they have become your de facto investors you must answer to, whether you see them as business partners or friends with spare cash. And negative word-of-mouth can muddy your reputation irrevocably.

Smith from the Lakes of Canada also advises keeping your supporters in the loop about your project. He tweeted photos of the band in rehearsal or teased new songs while the funding was churning along, giving fans a glimpse into the recording process while they were waiting to see if the campaign would reach its funding goal. This openness serves a two-fold purpose: It keeps your backers informed, and opens a valuable door for them to peek into your artistic process, which can help build you a wider following.

There’s also the issue of choosing the correct platform to use from the get-go. Is Kickstarter the best fit because it’s most widely known? Is it better to work with Indiegogo, where you can keep your pledge money regardless of whether you reach your goal or not, (unlike Kickstarter)? Is it worth giving up a percentage of your goal to reach a wider audience?

And what if a platform came along tailored specifically for artists? That’s what got Kelly Straughan thinking entrepreneurial thoughts. As the executive director of the Toronto Fringe Festival, she’s been nose-deep in a theatre scene rife with actors and writers passionate about their art but lacking the funds to stage their productions. This past March, the Fringe launched Fund What You Can (FWYC), a new online crowdfunding platform aimed towards Canadian independent artists. The site offers artists “Keep What You Raise” or “All Or Nothing” options found on other crowdfunding platform, but FWYC isn’t charging a fee for their service…for now. Starting Aug. 31, FWYC will charge 3.5 per cent of funded campaigns. The platform will also offer bi-monthly crowdfunding workshops to show new artists how to fine-tune their campaigns.

“This is a powerful tool for indie artists who aren’t at the level yet to access grants,” says Straughan. “Maybe these artists are right out of school or new to the arts sector and have no idea how to fund a project. Crowdfunding can be a lifeline.”

Toronto storyteller Marilla Wex turned to FWYC to help fund her one-woman show, set to debut at Fringe 2014. After reaching her campaign goal of $3,000, she quickly discovered crowd-funding has taken all the risk out of doing the Fringe – in a good way. “I can now use all of my box office take to pay myself for writing and performing the show,” she explains.

Even with a great-sounding, artist-friendly platform like FWYC, Straughan urges caution and stresses the importance of planning. “Don’t rush it,” she says, “and think your project through from beginning to end. Consider the challenges of your project stalling, even if your pledges start rolling in.”

A line from Straughan’s own Fringe production aptly summarizes the mindset that all indie creators should take before diving into the vast blue hole of crowdfunding:
“Focus on the marriage, not the wedding.”