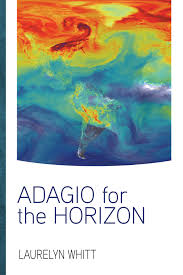 Split over five sections, Larelyn Whitt’s new collection of 54 poems is the sermon at a wake for the environment.

That’s not to say Adagio for the Horizon posits a dead Earth, or one beyond repair — rather, it frankly evaluates the world after many years of pollution, mass extinctions, and losses of habitat for many of its species, including, of course, our own.

The cover is an ominous heat map showing a brooding, deadly swath of red over much of the northern hemisphere. It’s almost as artful as it is terrifying, a telling contrast.

The opening section has four poems each beginning “Tar Songs.” It is our societal addiction to oil that Whitt connects with the dying off animals in these poems, a theme that plays out over the rest of the collection. She contrasts the ugliness of fossil fuel exploitation with the elegance of formal musical language, writing of “Syncrude,” “a Hydrocarbon Concerto” and, more pointedly, “the Oiled Duck Symphony” at play.

A few stanzas later, in perhaps the most pointed declaration of the poetry within, Whitt says “Dross remains / after what we desire / is taken away.” Humanity’s skewed priorities ignore that beauty, the seeming art, in the “dross” that remains.

Many of the poems in the other four sections have dedications to artists or animals Whitt hopes to reevaluate. There is a tribute to master stonewall artist Dan Snow. Then there is a poem on the extinct bird the great Auk, ironically hunted out of the world by the museum industry, along with references to wildlife photography.

All of this homage and juxtaposition aims at exploring the beauty of the Earth without the tendency to extinguish what has been observed.