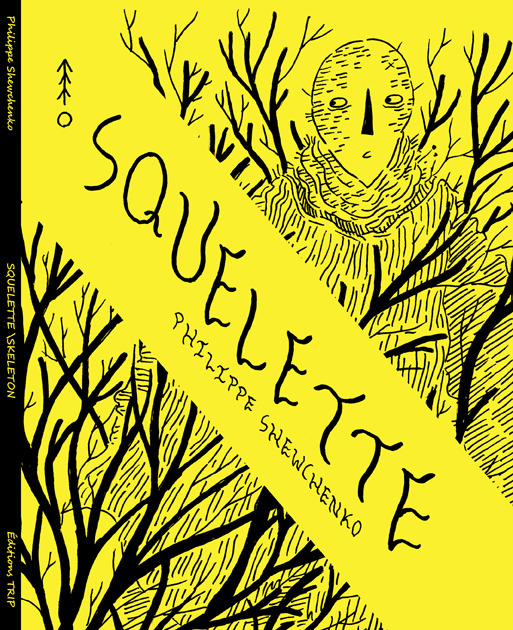 Plug your headphones in and let the soundtrack of Philippe Shewchenko’s first comic book carry you into a menacing forest filled with keys, doors, skeletons, and other fantastically creepy creatures that speak in a coded language of symbols. Squelette not only comes with a soundtrack, but also with a lexicon to decipher the skeleton language.

Shewchenko’s black, white, and yellow illustrations create intricate and gritty dreamscapes not bound by gravity, where skeletons and other creatures move through the forest, attempting not to get killed. It’s not all grim though, as Shewchenko integrates music throughout the comic, music which brings the skeletons and ghosts alive through dance.

In the last two pages, Shewchenko breaks from the coded language and narrates, in French, the strange experience that a skeleton had in this forest. As the skeleton watches the ghosts dancing, it articulates the overall feeling that Squelette has on readers: “En fait, je ne sais pas comment expliquer l’expérience… La nuit est étrange. La nuit est belle” (“Actually, I don’t know how to explain this experience… The night is strange. The night is beautiful.”)

The problem, however, when reading this comic is the difficulty of deciphering the symbols with the lexicon. Each symbol not only has three or four different possible meanings, but the way that Shewchenko arranges the symbols in the panels makes them incredibly challenging to match and decipher. After I tired of attempting to understand every single panel that included symbols, and focused on the visual narrative, the story really came alive. The strength of Shewchenko’s storytelling power really comes through the careful composition of the panels as well as the attention to detail of his illustrations. A challenging and trippy comic that rewards those that want to plunge into the depths of the forest.