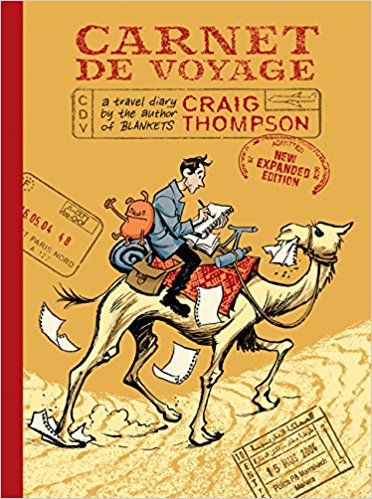 Travelling alone can be daunting and exhausting, as Craig Thompson quickly realized during his almost four-month tour of Europe. After the success of his critically acclaimed graphic novel Blankets, Thompson embarks on a book tour. During his journey in France, Morocco, Spain, Thompson he kept a sketch log that would eventually become Carnet de Voyage. Thompson revised his 2004 graphic novel in 2018 with an epilogue, reflecting on his previous travels, as well as divulging to the reader the reason for his need to record everything, even with his crippled hand.

Thompson does not sugar-coat his travels and often complains about how much he hates the trip, how sick, homesick, and heartbroken he is. While the narrative of this graphic memoir isn’t its strong point, Thompson captures the intricate layers of different cities and landscapes, and this redeems the text.

As a first-time reader of Carnet de Voyage, but not of Thompson, I couldn’t help but get frustrated by his incessant complaints. Travelling alone doesn’t have to be the life-changing journey that everyone expects it to be — sometimes it’s okay to sit in your hotel and be overwhelmed by the entire experience. Culture shock is a real thing after all! Thompson’s constant self-deprecating comments and complaints are often frustrating, but Thompson isn’t oblivious to this. He has a travel mascot and conscience, Zacchaeus, reprimand Thompson’s character by telling him that he’s “just whiny & egocentric & somehow oblivious to the REAL suffering outside” of himself because it’s “an American trait.” Thompson’s recognition of the futility of his problems reassures us that Thompson isn’t out of touch with reality, and he is just a human struggling with his own self-deprecation, anxiety, and sadness.

Want a peak inside this book? Read excerpts from Carnet de Voyage here