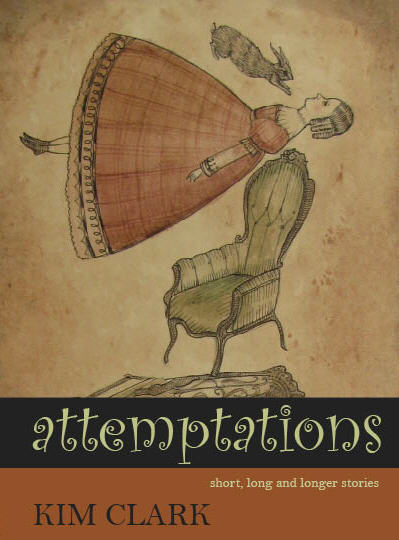 Vancouver Island’s Kim Clark has been busy, with three books coming out in two years. Attemptations — released in the fall of 2011 — is her first collection of fiction. It consists of nine stories described as “short, long and longer,” ranging from micro-fiction to pieces that are novella-length.
The people at the centre of Clark’s stories are marginalized in some way — usually physically — due to age, a physical handicap or a debilitating disease. In “Dick & Jane and the Barbecue,” even the dog, Rusty, is epileptic. At their heart though, these stories are about desire.
In “Mr Everything,” a man is hired to complete home repairs. He begins with the exterior of the house, moving to the interior, but soon discovers it is the woman herself who needs fixing, and that some things cannot be fixed. “Solitude” takes on tones of magical realism when a septuagenarian discovers a way to leech the essence of youth from her 26-year-old neighbour. In the final story, “Six Degrees of Altered Sensation,” a writer with MS learns that she has six orgasms left, and sets off on a quest to achieve them, while dismissing obvious routes such as sex with her ex. In the process she meets a man with three thumbs and manages a threesome with two people she’s just met named Yvonne and Yvon, and yet it’s her failures that are most endearing; thwarted desire layered with acerbic wit.
Not all stories work as well; “Split Ends,” “Lucky Strike” and “Flickering” in particular seem unfinished. Only a scene or two in length, they read like sketches, not quite filled in. Overall though, Attemptations is a strong first collection, darkly comic and sexy as hell. (Nico Mara-McKay)