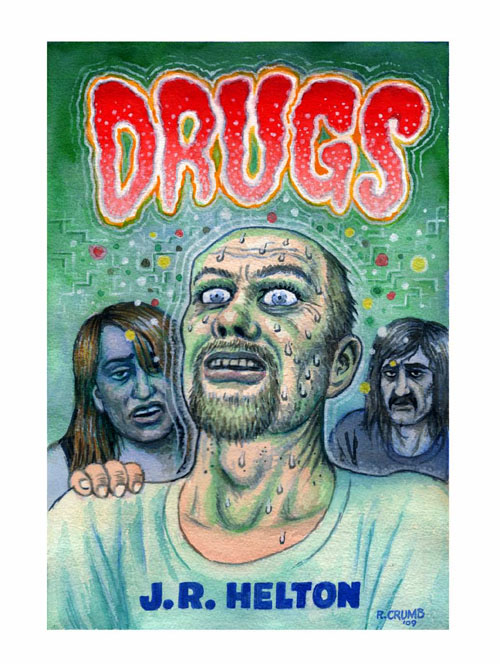 For three days straight, I did Drugs. The straightforward matter-of-fact prose — reminiscent of William S. Burroughs’ classic memoir Junky — latched onto my brain and wouldn’t let go until the final page.
The press release describes Drugs as a “fictionalized memoir,” which is a problematic genre.  All memoirs by their very nature are fictionalized through the prism of memory, but when a book is actually classified as such, it can leave the reader stuck in a grey mushy middle zone between fiction and fact. I sometimes wonder if the label “fictionalized memoir” is simply the publisher’s attempt to cover its ass in this post-James Frey-Oprah-smackdown world.
Other than a shocking rape scene that takes place early in the book, I really enjoyed Drugs. Helton runs through a staggering array of substances — marijuana, cocaine, MDMA, alcohol, nicotine, opium, Valium, Xanax, Codeine, Prilosec, magic mushrooms and nitrous oxide — and narrates the effects these drugs have had on his body, his mind and his life. Helton also doesn’t spare criticism of the hypocrisy that is the so-called “war on drugs,” pointing to Big Pharma as the biggest drug pusher in America.
One of the best parts about Drugs is there is no attempt at any Reefer Madness-styled “Hey Kids! Don’t Try This At Home!” moralizing. That said, this isn’t a “Rah Rah! Right On, Drugs!” type of book, either. As the book progresses and Helton ages, chronic pain rears its ugly head — and with chronic pain comes the attempts, both prescribed and recreational, at medicating that pain. Some drugs work, some don’t, and some work all too well.
Still not compelled to try Drugs? Then check this out: Helton has somehow scored a suitably sickly drugged-out book cover by none other than underground comics legend R. Crumb, who is quoted as saying that Helton is one of the best. So listen to R. Crumb, kids, and try Drugs today! (AGP)