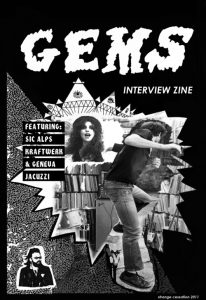 Who said that blogs killed the fanzine star? Gems testifies to the fact that a DIY print publication can be a vital and handy medium for finding out about the coolest bands on the planet.
This debut issue features Sic Alps, Kraftwerk, and Geneva Jacuzzi. Yes, you read that second one right. Apparently one day one of the editors was surfing experimental German rock videos when he stumbled upon the works of founding Kraftwerk member and Neu! tour mate Eberhard Kranemann. On a whim he asked if Kraneman would be game for an interview. What resulted was an engaging discussion about the art scene in Germany, rare Kraftwerk photos and program notes,and hilarious tidbits that are even more fun if you read them aloud in a German accent: “David Bowie …wanted me to play in his band. But I did not want that, I did not like him, his behaviour, and his womanish voice.”

What sets Gems apart is not just its crisp and clean, high-contrast black and white layout but rather the editors’  genuine enthusiasm that nearly leaps off the page at times. There are moments where it almost seems the artist can’t get a word in as the interviewer tries and fails to contain their excitement. One of them exclaims in advance of a Sic Alps and Sonic Youth show, “it’s gonna be a killer couple of days…I think me and my friends are gonna drop acid!” This speaks to my gushing inner music geek in the best way possible. So now, if you’ll excuse me, I have some music to download. (Chris Landry)