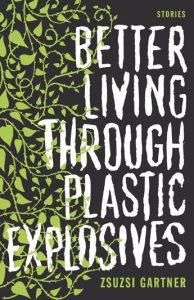 With one collection to her credit as author (All the Anxious Girls on Earth, 1999), and another as editor (last year’s seriously excellent Darwin’s Bastards), Zsuzsi Gartner knows the Canadian short story inside out. Her latest collection reinforces that fact. Better Living Through Plastic Explosives includes the marks of a decidedly north-of-the-border work (familiar place names, plus a certain attention to natural surroundings despite most of her stories taking place in Vancouver or Toronto), but thankfully leaves out nearly all of what can make stereotypical CanLit so dreadful (rurality, overwritten realist prose dripping with sentiment). Her brand of exaggeration, which often hits a satirical note, might have faltered if it wasn’t for the great writing. But it is, and so in most cases the stories and style succeed.
We get stories of the Darwin-obsessed, HBO-watching, vegetarian male locovores of a certain cul-de-sac who begin to lose their grip on the neighbourhood when a (at first metaphorical) Neanderthal moves in. There’s the young woman unsure of herself on a dinner date with her very mature partner, while “she’s wearing something flimsy, a pastel-blue blouse that floats above her midsection (exposing the only tattoo-free stretch of 23-year-old backside in the civilized world — her fear-of-pain thing neutralizing the humiliation she’s entitled to feel over not having a kanji symbol or Celtic knot peeking out above her thong; even her nose ring is a clip-on.)” And, my favourite, “The Adopted Chinese Daughter’s Rebellion,” wherein Gartner hilariously vivisects the moral contradiction that is cultural relativism. This line in particular — “We watched, those of us who lacked the emotional fortitude, the capacity for sacrifice, and the largeness of spirit (the chutzpah, some said, meaning it, of course, in the ecumenical sense) of our neighbours who had adopted Chinese daughters” — made me laugh out loud. Zsuzsi Gartner’s adroit, advertent irrealism easily carries the objective of each story as these are so clearly stories with something to say — a rare, beautiful thing. (Richard Rosenbaum)