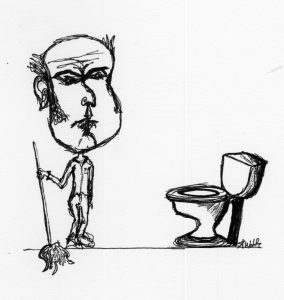 The artificial ferns are watered everyday by the janitor. The school secretaries beg him to stop, but he refuses, giving the whiskey eye, and says, “It’s either water or piss.  Your choice.”  Most everyone wishes he would die.
He’s got a name, but people don’t use it. He started signing everything with a single “X” years ago and sometimes forgets if “A” comes before “E” in Michael. In his head, with his feet close to the basement furnace, he settles on Mike. Mike spends most of his time setting up cameras in the women’s restroom. He’s not so much interested in the little kiddies at the school as he is in Doreen, the Vice Principal.
Doreen is the only reason he still works at the school. He saved her life once.  At least she thought he had. It’s a long story involving Doreen’s broke-down truck, torrential rains, and Mike, a stranger and hitchhiker, somehow stumbling upon the quick fix to starting her car. He had meant to kill her. She had given him a ride into town, had gotten him the job and he fell in love instead.
Now he likes watching her sit down on the toilet and relieve herself. He was never into that sort of thing before Doreen, but he liked to see her with her defenses down as well as her pants. He thinks that when you sit on a toilet, you’re joining the human race because, “everybody gotta piss,” and for that moment, Mike’s on Doreen’s level. He often waters her ferns and imagines proposing to her while she’s on the toilet. The secretaries know he’s a bad sort, but Mike knows Doreen just thinks he’s slow, and she doesn’t want to embarrass him by pointing out the artificiality of her foliage. He thinks it’s sweet of her. In his dreams they are married.
He curls up with his feet against the furnace, an intense heat on his soles that he has come to love, like Doreen, and falls asleep. Doreen is there, pants accordioned upon her ankles, asking him with an open heart to please water her plants.

A. Wolfe is a writer in Portland, Oregon, whose work has been published in Unsaid, The Collagist and The Rumpus, among others. She is the founder and an editor of Peninsulas Now Press.