(with Sherwin Tjia)
by Melissa Bull 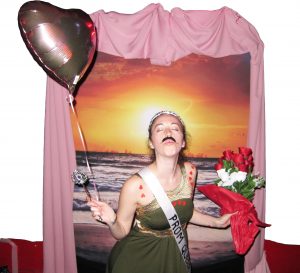 Poet, painter, illustrator and showman, Sherwin Tjia is a beloved phenom unto himself. Tjia, who grew up in the Toronto suburb of Scarborough but is now transplanted “like a heart, into Montreal,” has graced Montreal, Toronto and Ottawa with his titillating, crowd-pleasing events: Slowdance Nights, Love Letter Reading Open Mics, Cardboard Fort Nights, Crowd Karaoke sing-alongs, Strip Spelling Bees, Porn Karaokes and Dollar Dares. With each event, Tjia encourages us to burst into song, sway to anthemic cock-rock, moan into mics, rip off our drawers and spill our guts — not necessarily in that order. The goal isn’t embarrassment. Rather, Tjia’s events are contrived to break down the barriers that divide us. In the course of his interactive parties we reveal new aspects of ourselves, each one of us discovering our inner spectacle and sharing it with our fellow revelers.
This is how Tjia does it — and this is how you can get inspired to put together your own indie spectacle.

Step #1:  Set the Stage
Tjia, kindhearted master-plotter that he is, is driven to investigate how people will interact when he casts them in surprising settings. Staging an event that’s never been done (regular parties are boring, he says, because we all arrive and leave with the same posse) is his way of setting social norms tilt-a-whirling, allowing people who might not ever meet to tip into each other’s orbits.
Whatever the scene, Sherwin’s not just asking his audience to show up, pay admission and drink — though of course that’s part of the deal. He wants you to have your heart in it. “Putting on events,” says Tjia, “has transformed my life and the way I am with people. And so, I’m hoping that the events can do the same to the people who come to them.”
Want to make a scene, Tjia-style? This is what you do. First, get a hold on the kind of shindig you want to put on (think: bombastic! nostalgic! exuberant!). Next, streamline your plan to the nth degree: clearly outline what you’re asking of people in your invite. Forewarning is vital because “people like to know what they’re getting into,” says Tjia, “especially if they’re going to do something embarrassing, which is basically all my events. I’m asking them to do a lot. But only with their consent.”

Step #2: Reshape Reality
“I have found that reality is very malleable,” says Tjia. “Sometimes all you have to do to change reality is put on a weird event.” Some realities worth bending include revisiting your high school prom — only in a version where counterculture reigns cooler than cheerleaders. Next thing you know you’re rocking in the arms of a somewhat-stranger to Prince’s Purple Rain like it’s grade nine minus the acne!
Alternate realities aren’t as hard to conjure as you might imagine — Tjia has discovered there’s a collective craze for them. “I love slow dancing,” he says about Slowdance Nights. “I realized people wanted to do it. Like, they really needed to do it. It harkens back to an old way of courtship.” Adds Tjia, “With Queer Prom, people were like, ‘Oh my god, it’s the prom I always wanted, it’s the chance to do it over.’ Ultimately, I think that’s what underlies a lot of my events — [they’re] something that we can do again.”
You too can take on the role of a shape-shifter. Just keep in mind: the driving force behind any of Tjia’s events is an inclusiveness factor — all events are queer-friendly, age-friendly, just-folks-having-a-good-time-friendly. Tjia, who sizes himself up as “a straight cross-dresser,” embraces — even flaunts — the plethora of identities that make up our communities. He asks respect of his crowds. And the masses respond in kind. “People are great,” Tjia says. “They will rise to the challenge of being kind and compassionate if you ask it of them.”

Step #3: Control
When we step out of our regular social niceties, we can be surprised by the world again. Tjia says it’s almost like people are just waiting for an excuse to allow themselves the opportunity to bare it all, to approach others or sing — an excuse they don’t often get in their daily lives. “It’s great to make people do stuff: sing together, confess things,” he says.
But you still want to keep a handle on all that revelation. “I do my best to legislate certain policies at an event. I have to hope that people will have a good time and behave. And misbehave to a limit. To not call each other names or make fun of each other in a cruel way.” Picture an iron fist clothed in a single, white glove.

Keep that glove on: here are the Golden Rules of Event Management you need to know before you attempt to stage your own cabaret.

Golden Rule #1: Everyone Wants to Strip, Shock or Sing
Are you sure you know how to spell Mississippi? Sure, sure? Because Tjia’s taking the pants off of smartypantses, one city at a time. At his Strip Spelling Bee, participants can show off their nerd factor and their knickers. People are game: someone might spell a word just fine, pause a moment to gather up the crowd’s suspense and add an X to the end of the word. Just like that, they’re ripping off their duds. Skin and skill combined! Excitement factor of 10!
Less sexy, still fun: remember singing along with 30 other kids on the bus ride to camp? It’s not like you outgrow that kind of fun, you just sort of let it fade. “People don’t really sing together anymore, like at camp when you sit together and you all sing around a campfire in a circle,” says Tjia. So he came up with Crowd Karaoke. At Crowd Karaoke you can belt your heart out with folks who won’t notice if you’re off key. “What I’m discovering about these events,” he says, “is they’re about something you want to do but you don’t feel like you can do: hold each other to slow songs; sing really loudly together” or get naked in front of a crowd.
Notice a theme, yet? Safety in numbers. Hold that thought, young padawans.

Golden Rule #2: Event as Performance Art
Wait a second… is a Sherwin-staged event just another night out, or is it art? Tjia’s fine arts background has certainly played a role in his desire to stage spectacles. After studying the work of performance artists like Chris Burden, who was voluntarily and publicly shot in the arm as part of a performance, Tjia wanted to inspire the kind of wonder only a spectacle can provoke. “Performance art ups the ante to such a big degree,” he says. While he thinks his events are definitely performance-art driven, they are, he says, “at the same time quite grounded, very accessible.”
The moral of the story: make people comfortable (but not too comfortable). Bring them into the fun, never leave them sitting on the sidelines. And whatever you do, make sure people sit up and take notice. If it comes from the right place, your event can be anything you want it to be ­­— and probably a whole lot more.